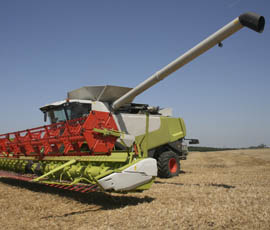 A farming company has been fined £120,000 and ordered to pay £45,000 in costs after a man was electrocuted while working on farmland near Ludgershall in Wiltshire.

Salisbury Crown Court heard Edward Pybus, 21, from Northallerton in Yorkshire, was harvesting crops at Chute Farm, Upper Chute, when he received the fatal shock on 6 August 2007.

Farm manager Velcourt Ltd was prosecuted by the Health and Safety Executive as the firm was responsible for both the recruitment of casual farm workers, including Mr Pybus, and for managing health and safety on site.

The combine harvester Mr Pybus was driving had a problem with the grain discharge spout and so it was left extended while he was cropping. The field had 11,000 volt overhead power lines running across it.

During cropping the harvester had picked up stones and soil. Mr Pybus stopped the machine in order to clear it, not realising the grain spout was touching one of the power lines.

As Mr Pybus got out of the harvester and stepped onto the ground, he received a fatal electric shock of 6,300 volts.

HSE discovered Velcourt had also failed to ensure the farm manager received adequate health and safety training. As a result, no risk assessments had been carried out at the farm for working in fields with overhead power lines, nor had the farm workers received adequate training on how to work safely.

In addition, no assessment of the risks of operating the combine harvester model being used by Mr Pybus had been carried out. If one had, it would have found the machine’s height with the chute extended (5.7m), exceeded the legal minimum height of overhead lines in fields (5.2) and the actual height of the lines in Forest Lane Field (5.6m).

Mr Pybus’ mother, Rachel Pybus, said: “Edward was a wonderful young man, funny, vibrant, on the brink of his adult life, with so many plans, hopes and dreams. He was to start a new job after the harvest and was hoping to set up home with his girlfriend. None of us can really believe he is gone

“It is our hope this judgement will prompt the agricultural industry as a whole to improve working practices and endeavour to make farming safer.

“Young men temporarily employed on farms during busy periods, such as harvesting, may have a lot of experience in farming, but many of them are still very young and their life experience is limited. They are owed a duty of care by their employer and that should be paramount.”.