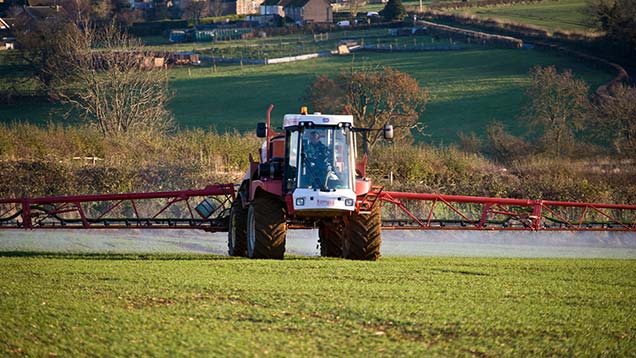 Farm industry leaders have called on Brussels to ensure pesticide regulations are based on sound science.

Representatives from the three organisations met MEPs and European Commission delegates in Brussels on Wednesday (4 February).

The loss or restriction of plant protection products due to over-precautionary EU regulation would have a severe impact, warned a report commissioned by the NFU, CPA and AIC.

Agriculture’s contribution to the national economy could drop by 36% (£1.6bn) – with the loss of up to 44,000 jobs, according to the study by farm consultant Andersons.

The domestic production of British foods such as frozen peas, apples and carrots could be drastically reduced, the report said.

“If regulators continue to stifle British food production through bad regulation, they are exporting our agricultural production capabilities to those parts of the world that have a less hostile attitude to food production.” Guy Smith, NFU

A separate report by the Agriculture and Horticulture Levy Board suggests the loss of agrochemical actives due to recent EU hazard-based criteria could cost UK agriculture more than £905m.

The NFU, CPA and AIC say EU regulation should be risk-based, considering dose and exposure, and also consider the impact of loss of active ingredients in plant protection products (PPPs).

NFU vice-president, Guy Smith said: “We have been warning that in the lifetime of the current European Parliament, we would face significant threats to PPPs.”

He added: “British farmers are increasingly lacking plant and crop protection tools, causing problems that their competitors outside of Europe don’t have.”

Many retailers already looked to cheaper imports globally from farms that used plant protection products not allowed in the UK or the EU, said Mr Smith.

“If regulators continue to stifle British food production through bad regulation, they are exporting our agricultural production capabilities to those parts of the world that have a less hostile attitude to food production.”

CPA chief executive Nick von Westenholz said it was vital that policymakers properly assessed the risk and impact of their decisions – and what the fallout would be if they got it wrong.

“Good regulation is vital if we are to protect consumers and the environment while also fostering innovation in agriculture. However, bad regulation achieves neither.”

A more proportional approach to risk was needed in the EU, said Mr von Westenholz.

This should include the adoption of an innovation principle so that whenever precautionary legislation is under consideration, the impact on innovation was taken into account.

They included studies by the Health and Safety Executive and the Water Research Council, said Mr Caffall.

“There appears to be little doubt that the current precautionary stance on the availability of PPPs threatens the future of technology and the advisory network to support optimum agricultural production across the EU.”