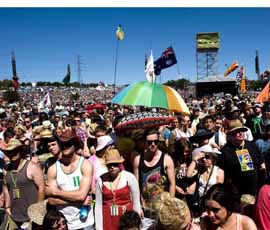 A farm could be turned into a venue for music festival hosting up 60,000 revellers, if organisers can overcome strong opposition from residents.

Neighbours are angry about plans to use a farm near Reigate, Surrey for a three-day festival that would rival the Reading Festival.

An entertainment company has applied for an events licence for Edolphs Farm at Norwood Hill, near Charlwood. But those opposing the application say residents will be affected by traffic congestion and noise from the venue.

Kim Seaman, owner of Edolphs Farm, told the Surrey Mirror she was shocked at hostility to the plans.

“I can’t believe how angry everyone is,” she said. “All we wanted to do was organise something nice for the area. Allowing the licence on the farm could mean we would have the opera, a drive-in cinema or any number of events, not just a festival.”

Councillor Charles Yarwood from Mole Valley District Council, which received the licence application, said the music festival would be two-thirds of the size of Reading Festival, with the corresponding levels of crime.

Patrick Cox, a resident who lives near the farm, said there could be traffic problems. “Up to 60,000 people and 18,000 vehicles could be coming into the area,” he said. “It doesn’t take much to upset the flow of traffic in this area.”

But Fiona Stimpson, chairman of the Horley Chamber of Commerce, said it would bring business to the area. “If it could bring money to the area that has to be good,” she said.

Join our Boots and Heels podcast featuring farmer Becca Wilson and Farmers Weekly community editor Lizzie McLaughlin. They invite you to take an educating, empowering walk in their shoes as they explore all that agriculture has to offer, and show that two people from different backgrounds can both find a foothold in this diverse and exciting industry.
Listen now
See more
Share this