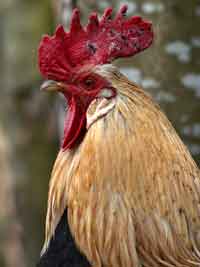 A farmer has been threatened with a £5000 fine unless he stops his cockerels from crowing.

Paul Haworth of Battlers Green Farm, Radlett, Hertfordshire, was threatened with the fine from his local council after a neighbour complained about the noise from his four cockerels.

Hertsmere Borough Council monitored the noise from the farm and issued Mr Haworth with a noise abatement notice, giving him until 20 August to silence the birds.

Mr Haworth said it was the first complaint to have been made about the birds over 20 years.

Attempts to use a hedge to muffle crowing did not satisfy the council.

His wife, Gillian, said the cockerels were there for the enjoyment of farm visitors.

“The cockerels give a great number of children pleasure,” she told the Telegraph.

Jean Heywood, Hertsmere cabinet member for environment said it was “reasonable” for cockerels to crow on farms.

“But in this case the problem is continuous crowing for hours at a time,” she said.

The council said that the noise was seriously affecting “quality of life” and would seize the birds if the problem continued.