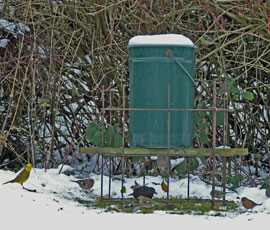 Paying farmers to feed their farmland birds during winter could become an option in stewardship schemes, following a study by the Game and Wildlife Conservation Trust (GWCT).

The GWCT is investigating the benefits of supplementary feeding during the leanest winter months.

This is despite the introduction of agri-environment schemes, which pay farmers to put in a range of wildlife-friendly measures on their farms.

Peter Thompson, farmland biodiversity advisor with the GWCT, said a lack of late winter and early spring food, from January to mid-April, known as the “hungry gap”, played an important role in the survival of these species – as well as affecting their breeding success later in the season.

“We believe that it is vital for the recovery of farmland birds that supplementary feeding either through pheasant hoppers or spreading grain on the ground is included as an option under stewardship schemes and government is largely in agreement,” he said.

“However, before this happens they want us to clarify a number of points in order to maximise the success of this option.”

An important aspect of the trial is to develop ways of ensuring that non-target species, such as pigeons, crows, pheasants and squirrels do not benefit from this supplementary food.

Mr Thompson said: “Before supplementary feeding is included as an option in environmental schemes, we need to reassure government that the food is not being wasted on common species such as rats or crows.

“We also need to identify the type of seed that should be provided in hoppers and the amount that needs to be supplied to have the desired result.”

The GWCT’s previous research on its Allerton Project farm showed that farmland bird numbers were two-and-a-half times higher in years when additional grain was provided through pheasant feed hoppers than years without.