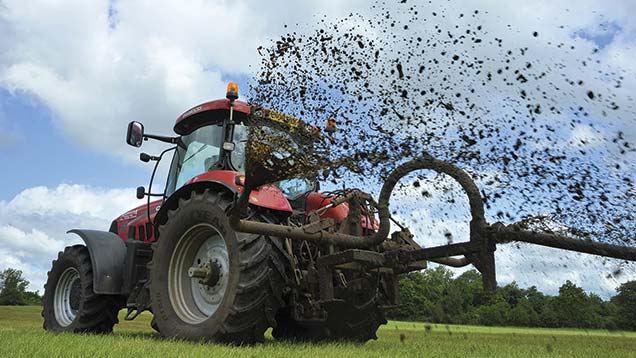 More farms in Wales are facing tougher restrictions on fertiliser and manure spreading after a Welsh government review of nitrate vulnerable zones (NVZs).

About 2.4% of land in Wales comes under NVZ regulations, but the government agency Natural Resources Wales (NRW) is understood to be monitoring additional sites in Carmarthenshire and Pembrokeshire.

However, a spokesman for the Welsh government said it was not yet possible to disclose which regions might be considered for designation because it had yet to receive recommendations for candidate sites from NRW.

A consultation on any proposed changes is likely to get under way by the end of this year and farmers in the affected areas will be notified ahead of this process.

NRW is currently analysing its data before making interim recommendations to the Welsh government on which areas they consider should be designated as NVZs.

In the last round of designations, in 2012, many farmers had to adapt their businesses to store animal manures for a considerable period of time and in conditions that complied with the legislation. In some cases this meant significant investment.

At the time, £3.1m of grant funding was made available by the Welsh government to help farmers comply with the regulations.

A Welsh government spokesman said that under Wales’ new Rural Development Programme, support was likely to be delivered through sustainable production grants.

“Sustainable production grants will be available to farmers across Wales, including those in NVZs,’’ the spokesman said.

“Investments in slurry and manure stores, which pose the greatest financial burden, will be eligible and the proposed prioritisation criteria favours those farmers looking to develop profitable and resilient businesses in the newly designated areas in 2017.’’