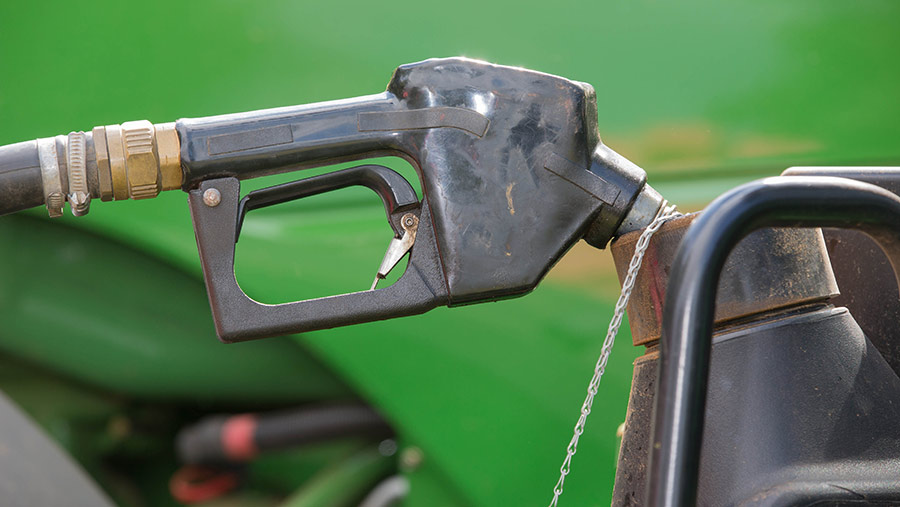 Farmers affected by the fuel quality issues are being urged to complete a red diesel survey.

The NFU and NFU Scotland have received hundreds of complaints from farmers experiencing blocked fuel filter problems in tractors and other farm vehicles.

The filter clogging issues began in August and have been linked to the quality and composition of red diesel.

The problems seem related to an increase in the fatty acid methyl ester (FAME) content of diesel fuel and gasoil, which influences its performance. FAME is the generic chemical term for biodiesel derived from renewable sources.

Fuel supplier Petroineos said it had reduced the amount of biodiesel blended into its fuel – down from 7% to 5% – in a bid to alleviate the issues, while it investigates the causes of the filter blockages.

NFU Scotland said it had received more than 400 reports of fuel filters in farm machinery blocking up unusually quickly – and needing to be replaced more frequently than expected.

Machinery affected includes a range of makes and models, costing members both time and money.

NFUS president Andrew McCornick said: “The actions taken by Petroineos last week were welcomed, but our farmers are now left with problematic fuel they may not be able to use, which is stored on farm. In some cases, farmers will have taken delivery of enough fuel to last all winter.

“We are looking at potential solutions to assisting with this and hope to have more information on this shortly.”

Farmers are being advised to keep all receipts for fuel, and for related mechanical work, repairs and replacements.

Farm leaders have stepped up their lobbying with the Department for Transport (DfT) and Transport Scotland to raise awareness of the fuel filter problems and subsequent fuel supply issues. The farming unions are working hard to get commitment from stakeholders to support farmers in the recovery of this fuel.

Have your say on red diesel issues

The NFU and NFU Scotland is asking members and non-members experiencing filter-blocking issues to complete its Red Diesel Issues Survey every time they experience a problem.

Information provided through the joint survey will be used to  gauge the level and geographic spread of the problems, help understand the causes and what actions can be taken.

The survey takes no more than 15 minutes to complete and is completely anonymous.

The information collected will help the NFU’s investigations into the causes of the problem with the fuel industry and the DfT.

Before you start, it will be handy to have information about the ‘type-approval number’ of the affected engine (found on the engine plate and beginning with ‘e’/’E’) and the micron size of the affected filter.

In addition, farmers are being advised to: