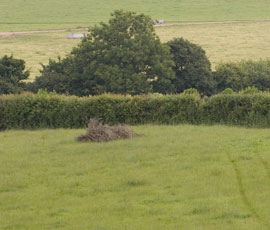 The Ulster Farmers’ Union has withdrawn its co-operation with the RSPB until it engages in “meaningful negotiations” about reducing the hedge cutting closed period.

The union, which has previously been an active supporter of the RSPB Nature Of Farming Awards, has urged all farmers in Northern Ireland to do the same.

Farmers in Northern Ireland are prohibited from trimming hedges between 1 March and 31 August each year. But the UFU said the closed period is shorter and more flexible in other parts of the UK – and should also be reduced in Northern Ireland.

It said farmers needed the option to trim hedges in August, where necessary, to ensure the completion of essential field work, which may not be possible when ground conditions become too wet later in the year. The UFU said it could no longer tolerate the RSPB’s “intransigent approach to discussions about reducing the hedge cutting closed period”.

In addition, the union said that Northern Ireland’s Department of Agriculture and Rural Development (DARD) could make the decision to reduce the closed period but had been unwilling to do so because of the RSPB’s stance.

UFU President John Thompson said: “It is regrettable that we have had to take this course but the RSPB’s unwillingness to negotiate properly on this issue has left us with no option.

“The problem is compounded by the fact that DARD have been unwilling to take the necessary steps to bring our closed period into line with other UK regions because of the RSPB’s stance.

“This is a genuine issue which our members regularly raise with the union’s leadership team. Being unable to trim hedges in August can cause real operational difficulties for farmers.”

Having the option to trim hedges in August would facilitate necessary farming practices such as reseeding or the sowing of winter crops at a time, which is most suitable for their establishment, he added.

Mr Thompson said the RSPB had failed to produce scientific evidence to justify why the closed period in Northern Ireland was different from the rest of the UK, but instead have simply adopted an unhelpful blocking position.

“Their stance on this issue is very damaging to their relationship with farmers who do so many positive things to enhance our bird population,” he added.

“Thousands of farmers have enthusiastically participated in agri-environment schemes, over 2,000ha of wild bird cover is grown annually by the farming community and over 100km of hedgerow have been restored by our members.

“Despite all of this, the RSPB have stubbornly refused to co-operate with farmers on the hedge trimming issue which is most unfortunate”.

The UFU said it would continue to lobby DARD to take the necessary legislative steps to allow hedge trimming on farms in August.

An RSPB spokesman said: “This debate has been going on for some time and it is up to the statutory agency, DARD, to decide what the dates are.

“We have recommended that it starts from 1 March to 31 August and we have provided scientific evidence for that.”

A DARD spokesman said: “The hedge cutting closed period dates are in place to help farmers and landowners comply with the Wildlife and Natural Environment Act (NI) 2011 which makes it an offence to intentionally or recklessly take, damage or destroy the nest of any wild bird while it is in use or being built.

These dates help those that farm the land to avoid breaking the law by damaging birds, nests or chicks.

“Any change to cross-compliance hedge cutting dates should be based on scientific research evidence and the impact of this on biodiversity and agricultural practices. DARD will respond to any new evidence as it comes forward.”