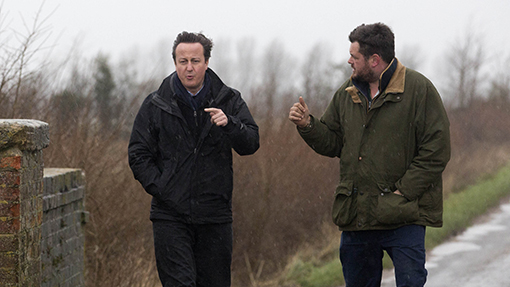 An Oxfordshire farmer has warned David Cameron the effect of the floods will devastate his business into 2015 – and possibly beyond.

Flood-hit farmer Tim Hook is facing a six-figure loss after his land flooded for the sixth time since 2008. He warned that many other farmers were facing similar devastation.

Six weeks of torrential rainfall at Cote Lodge Farm in Bampton, Oxfordshire, has left about 162ha (400 acres) of crops under water.

Floodwaters will likely destroy about 121ha (300 acres) of wheat crops, which have been rotting under water since the farm flooded in December.

See also: Flood-hit farmers – how you can help

Like other flood-blighted farmers, especially those in the South West and in the Thames Valley, he will need to spend thousands of pounds buying in forage to make up the deficit to feed his 200 dairy cows.

The prime minister visited Mr Hook on his farm in his Oxfordshire constituency last Friday (14 February), to see the problems for himself.

He stressed to the prime minister the need for river maintenance works to resume, rather than the government just ploughing money into major capital improvement projects.

Speaking after the visit, Mr Hook said: “Mr Cameron said he was going to look at our situation. He said something has got to be done.

“I was explaining to him about the need for dredging the Thames and how the Environment Agency is pushing it back on riparian landowners to do the watercourses.

“Dredging major rivers can be part of the solution to the problem – it’s not the panacea. It also involves desilting, vegetation management and ditch clearance.

“We should also stop growing lots of trees alongside water; the boughs just break and block the flow of rivers.”

Last week, Mr Cameron unveiled a £10m package to help flood-hit farmers rebuild their businesses, which has been welcomed by the farming industry.

Mr Hook attended an NFU branch meeting at Charlbury, Oxfordshire, with Environment Agency officials last Tuesday (11 February). However, he said agency officials told him that dredging the River Thames would not make much difference.

“We told the Environment Agency that we wanted the River Thames dredged. We sat there and listened to them and they said that dredging the Thames is not making any difference,” he explained.

“I just wonder if they are so hoodwinked in the Environment Agency and concerned with greening issues that they cannot see the wood from the trees.

“Thirty years ago, we never saw the floods like this. The water came and went away quickly. Now when it floods, it stays flooded for weeks. We can cope with it when it floods for three weeks, but no farmer can cope with having their crops under water for eight weeks.”

Mr Hook has questioned whether a government pilot scheme to allow landowners to dredge main rivers, which began last autumn, will ever work .

He said farmers would be asked to carry out the work once the floodwaters recede, but warned many will be too busy with harvest.

“I told Mr Cameron that the farmers haven’t got the kit to dredge the major watercourses, or the labour. All of a sudden, there is a lot of work to be done,” he added.

“Now the Environment Agency is turning around and saying to farmers: ‘It’s your responsibility.’ They are basically passing the buck.”

Isobel Bretherton, NFU south-east spokeswoman, said the effect of the flooding on farms in the South was still an emerging picture.

“We still don’t fully have a sense of the scale of the impact. But those who are hit worst are largely in the river valleys,” she added.

“We are also seeing a lot of example of farmers who are saying their farming has been affected by inaction and lack of management of watercourses by the Environment Agency, who say they don’t have the resources to do the job.

“On top of this, people are suffering from over development on the floodplains – not just housing, but business parks and shopping centres. This can change the hydrology of an area.”

The Farming Community Network (FCN) said it had seen an increase in calls to its helpline over the past few weeks, especially from farms in the South West.

FCN spokesman Peter Riley said: “All the farmers down there have got their work cut out looking after their farms, their machinery and livestock and their own homes and families.

“I suspect there is not going to be much grass around, as it’s all under water. Farmers are really going to struggle without having any grass for the summer. The reality will strike really hard in the winter.”

Mr Riley suspects the true scale of the problems will manifest itself over the coming weeks.

“We are anticipating that there will be an increased demand for the support of our volunteers in the weeks and months to come,” he added.