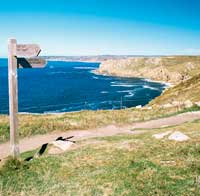 The government is seeking views on its plan to create a right of public access to England’s coastline.

It has launched a consultation on proposals to amend the Countryside and Rights of Way (CROW) Act 2000 for coastal land.

Amendments will ensure coastal land is included within the CROW Act’s description of land to which the public has a right of access for open-air recreation.

The main proposed changes are to remove the right for landowners and others to exclude or restrict access at their discretion.

Powers for landowners to exclude access to coastal land for up to 28 days each year are inappropriate and should be removed, the consultation suggests.

It is also inappropriate for landowners to restrict coastal access for people with dogs during lambing, says the document.

Further changes will enable Natural England to put restrictions or exclusions in place without application from landowners.

Natural England would also be able to exclude or restrict access to designated areas of salt marsh or mudflats.

The closing date for submissions is 1 December 2009.