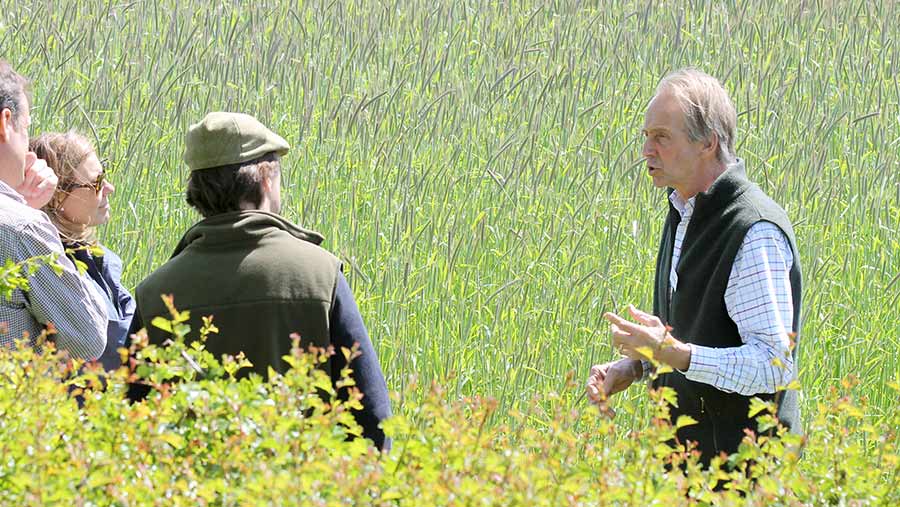 David Wilson on the farm at Duchy Home Farm

Back then organic farming was new to Mr Wilson, but he shared The Prince of Wales’ unease about intensive farming systems and was keen to take up the challenge.

The farm concentrates on multiple enterprises with a mix of livestock and arable production.

The land is managed on a seven-year rotation – three years of multi-species leys to build fertility, followed by winter wheat, spring oats, beans or malting barley and rye, which gradually deplete fertility.

There are three livestock enterprises (see panel below), with an emphasis on pure breeds and rare breeds.

This fits in with the Prince’s belief in the importance of protecting genetic diversity, despite the fact there may be a price to pay in terms of productivity.

Where possible, hedges are laid to obviate the need for wire fencing, while the farm woodland is  processed for use around the farm, with the bark composted to fertilise the vegetable beds.

Mr Wilson is fully aware of the need for the farm to be commercial – not least because he has to pay normal commercial rents to the Duchy of Cornwall.

Having a mixture of enterprises means the farm is less vulnerable to climatic and economic change compared with neighbouring farms with a narrower income base.

“On those conventional farms, yields plateaued several years ago, while their running costs have gone up and up and they are hitting the buffers,” says Mr Wilson.

“On our farm, we are also seeing margins squeezed, but we are becoming more targeted in what we grow and how we market it.”

The farm has a small vegetable business, with produce sold direct to consumers, and it is investing in a milk-vending machine, to retain more of the organic premium.

While profits are far from guaranteed, environmental delivery certainly is, which Mr Wilson believes will put the business in a good position for future earnings, as taxpayer support moves towards a system based on “public money for public goods”.

A mix of livestock ensures income streams are spread

The sheep at Duchy Home Farm comprise a mix of breeds, including Lleyn, Cotswold and Shropshire, of which about 100 are owned and the rest managed as part of a joint venture.

They are outdoor lambing and survive on a diet of grass or conserved fodder, which ensures a high omega-3 content – reputedly good for human health.

The flock is run as a single unit, though they are separated out for breeding, with the first lambs arriving in early April and sales beginning in July. Lambing percentage is put at 170%.

Mr Wilson says it is frustrating that wool, which is marketed as organic, is so undervalued – given the fact it is a natural fibre competing in a world of synthetics that are so bad for the environment.

The 200 milkers at Duchy Home Farm are Ayrshires – chosen by the Prince of Wales on the grounds that they are not black-and-white ­– with a smattering of Dairy Shorthorns.

Yield averages just 6,000 litres a cow, though each cow manages six or seven lactations – considerably more than those in a commercial Holstein Friesian set up.

The milk is marketed through the Organic Milk Suppliers’ Co-operative (OMSCo) and currently achieves a 12-month rolling price of 42.8p/litre.

About two-thirds of the milk is from forage – clover-rich swards designed for their digestibility – with the cows fed less than 1t of concentrates each per year.

Mr Wilson makes full use of homeopathic and herbal remedies to counter any health challenges. Even though antibiotics can be used on organic livestock, withdrawal times are longer.

The beef enterprise at Duchy Home Farm comprises about 100 head of cattle made up of Aberdeen Angus, Gloucester and British Whites.

This mix is partly designed to help the Rare Breeds Survival Trust with retaining certain genetics, but also recognises the opportunities for traditional beef breeds in top-end markets.

All calves are spring-born and reared on the farm, being finished and ready for slaughter at between two and three years of age. Their diet is made up entirely of grass and silage with no concentrates in the ration.

Much of the beef is sold via the Organic Livestock Marketing Co-operative and ends up in supermarkets, though some goes direct to quality butchers and to Clarence House in London.