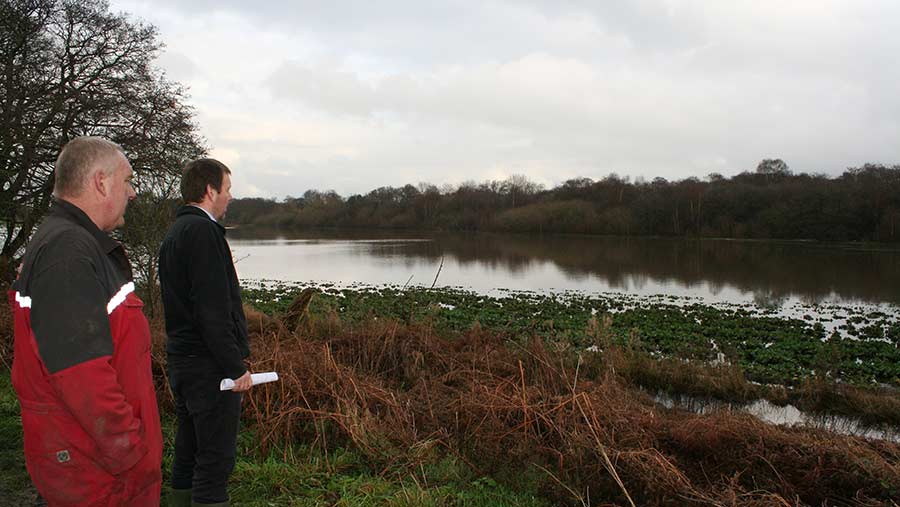 A Lancashire farmer says he is not sure he can continue farming after the floods devastated his fields, causing £230,000 of estimated crops losses.

Allan Butler said he feels as if he has “worked all of his life for nothing” after losing 22ha of crops.

The NFU described Mr Butler’s situation at Causeway Farm in the leafy Lancashire village of Rufford as “heartbreaking” and “devastating” and said it was possibly the worst case of flooding to affect a farm business in the UK this winter.

NFU North West spokesman Carl Hudspith said the union was urgently trying to assist Mr Butler and he called on the authorities and charities to offer him as much help as possible.

“Farms in Cumbria and the North East have been hit badly, but it is over a wide area,” said Mr Hudspith.

“But Mr Butler stands to lose more than any farm I have ever seen. He just does not know where to turn.”

The flooding hell hit crisis point at Causeway Farm on Boxing Day after part of a river embankment along River Douglas, which protects the farm, gave way, sending a wall of water pouring onto the land.

The water penetrated a 2m gap in the embankment. Dozens of acres of potatoes, cabbages and spring cabbages were left submerged under floodwaters more than 10ft deep in some fields.

Mr Butler said he previously asked the Environment Agency to make sure the embankment was plugged with sandbags and other materials.

“I would usually harvest my potatoes in mid-December, but I struggled as my son had to have a hernia operation,” said Mr Butler.

“Basically all of my cash crop is under water.”

The crop losses, for which he was uninsured, have pushed his business to the brink of financial ruin. But if he continues to farm, he fears a similar flooding catastrophe will happen again.

“What really worries me is the threat of the bank bursting again,” added Mr Butler.

“How can I recover and begin to grow high-value crops again without any protection and the very real threat of the bank bursting again within my lifetime?

“I told the Environment Agency there was a problem with the embankment. It’s also breaking in other places. As a grower, I can’t move crops. If it were cows or sheep you might lose a few, but you wouldn’t lose everything.”

Mr Butler said he did not know what the future holds, or even if he wanted to carry on farming.

“I’m 56, I work stupid hours and I will probably end up with a mortgage bigger than when I started out,” he said.

“I never thought this would happen. There’s nothing I can do and everyone’s after me for money because they think I’m going bust.”

He said: “A great deal of the focus has been on the effect of the flooding on urban businesses. However, we have seen a lot of damage to farms and and the cost to agriculture will run into millions.

“In west Lancashire, horticulture is a major sector and employs thousands of people, generating millions for the local and national economy. Just because the area flooded is not on hard-standing ground does not mean the economic effects of flooding is less devastating.

“We need to find solutions that recognise the importance of farmland and protect it where necessary.”