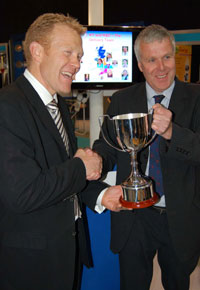 BPEX’s Nigel Penlington has scooped the prestigious Chris Brant Award at the Pig and Poultry Fair for his dedication to the industry.

Chairman of judges, Richard Longthorp explained the impact Mr Penlington had had to the industry in such a short space of time. “It is probably fair to say without Nigel’s intervention in the debacle that is IPPC, there would be many whose investment plans would have been thwarted by impenetrable red-tape. With his direct help, these businesses have managed to push forward and not yet be suffocated by IPPC.”

The award which was formerly known as the Pig Industry Service Award – is made to someone who has gone that extra mile on behalf of the pig industry and is presented every year.

• All the news from pig and poultry