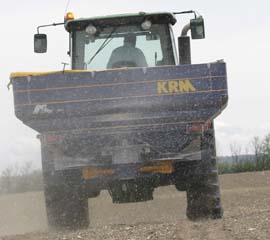 Pollution from nitrogen far outweighs any agricultural benefits and must be curbed, scientists have warned.

The annual cost of the damage caused by nitrogen across Europe could be as high as £280bn, according to a pan-European study. This is more than double the extra income gained from using nitrogen fertilisers in European agriculture, it warns.

Put another way, nitrogen pollution costs each European citizen £650 a year, reducing life expectancy by several months in some countries.

Findings from the first European Nitrogen Assessment (ENA) will be launched at a conference in Edinburgh on Monday (11 April). Some 200 experts from 21 countries carried out the investigation.

Their study is the first time nitrogen pollution has been valued in economic terms at a continental scale.

Nitrogen is needed to feed a growing world population, the scientists concluded. But it also pollutes air, soil and water.

It also contributes to higher nitrate levels in drinking water, toxic algal blooms in the sea and the loss of plant diversity in forests.

The scientists stop short of calling for a fetiliser tax to curb nitrogen use. But they do identify livestock farming as the source of most nitrogen pollution.

Changes are needed in agricultural practices and in consumer behaviour, the report concludes.

Curbing nitrogen emissions was a central challenge, said lead author Mark Sutton, from the UK’s Centre for Ecology and Hydrology.

“Nearly half the world’s population depends on synthetic, nitrogen-based fertiliser for food but measures are needed to reduce the impacts of nitrogen pollution.

“Solutions include more efficient use of fertilisers and manures, and people choosing to eat less meat.

“We have the know-how to reduce nitrogen pollution, but what we need now is to apply these solutions throughout Europe in an integrated way.”

Professor Watson said: “It develops the vision for a more holistic approach, which is vital if we are to make progress in tackling these issues.”