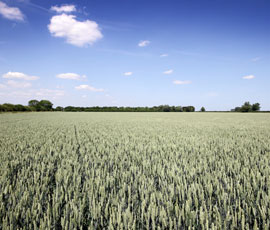 The study, jointly funded by the Natural Environment Research Council and the Met Office, also suggests that increasing levels of air pollution from one continent may partly offset efforts to cut carbon emissions in another.

The findings have important implications for international strategies to tackle global food shortages, as well as global climate and human health strategies.

In a paper published in Biogeosciences, researchers show how ozone pollution generated in each of the northern hemisphere’s major industrialised regions – Europe, North America and South East Asia –

Of the yield losses to Europe caused by ozone, pollution originating from North America is responsible for a 1.2m tonnes annual loss of wheat.

Researchers calculated projected levels of surface ozone concentration, a powerful air pollutant that is not only harmful to human health, especially the respiratory system, but also damages vegetation by damaging plant cells and inhibiting plant growth.

Enhanced surface ozone concentrations are produced through a chemical combination of hydrocarbon compounds and nitrogen oxides.

Nitrogen oxides are emitted into the atmosphere during high temperature combustion, for example, by combustion of fossil fuels from motor vehicles and in coal-fired power plants.

Michael Hollaway, a PhD student at the University of Leeds, used a computer model to predict reductions in global surface ozone if man-made emissions of nitrogen oxide from the three continents were shut off.

Using crop location and yield calculations, researchers were able to predict impacts on staple food crops, each with their own unique sensitivity to ozone pollution.

Research leader Steve Arnold, of the University of Leeds’s school of earth and environment, said: “Our findings demonstrate that air pollution plays a significant role in reducing global crop productivity, and show that the negative impacts of air pollution on crops may have to be addressed at an international level rather than through local air quality policies alone.”

Total European wheat production is around 130m tonnes a year. Europe’s own pollution remains the biggest contributor to its wheat crop loss at 3.5m tonnes a year.

However, the study found the impact of Europe’s pollution on other continents was minor due to fewer low pressure systems and weather fronts, which were responsible for transporting pollution across continents.