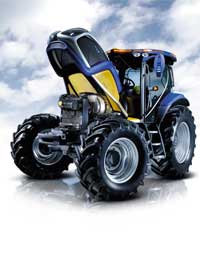 Based on a T6000 tractor, the prototype runs on hydrogen and oxygen and produces nothing but water and will also be on show at SIMA show in a couple of weeks time.

Essentially, a fuel cell works a bit like a giant battery, with a pair of electrodes surrounded by an electricity-conducting solution. Hydrogen (stored at 350bar pressure in a tank under the bonnet) is passed over one electrode, while oxygen (from the air pump) is passed over the other.

In New Holland’s case, a catalyst on the surface of a membrane extracts electrons from hydrogen gas.

This allows electrons to pass through an external circuit and create electricity. Once on the other side of the membrane, hydrogen recombines with electrons and oxygen to create water.

The electric current generated then passes to a pair of electric motors, one to drive the rear and front axles and the other to run the pto and auxiliary services.

The NH2’s fuel cell generates 106hp and sends the power via a splitter (from a bi-directional TV6070 tractor) to the four wheels. There’s no gearbox or clutch and increasing speed simply involves generating more power from the fuel-cell. Going into reverse is easy – you simply flick the shuttle lever, which in turn reverses the fuel cell terminals.

New Holland is the first to admit that there is still a lot of development needed before this tractor will be on sale in dealers. For a start, the hydrogen tank only holds enough fuel to power the tractor for 1.5-2 hours, but this will be replaced by one which will last up to 8 hours in prototypes to come, says NH. But compared to how long a battery the same size as the hydrogen tank would last (about 3 minutes’-worth of ploughing), producing power on demand this way is viable.

What’s the point of a fuel-cell tractor? No emissions and zero reliance on fossil fuels are the main attractions. That may not be that important now, but in 10 or 20 years they’re likely to be essential qualities for any vehicle.

The dream of a hydrogen-powered utopia has been thwarted by boring practicalities. The lack of a national hydrogen distribution system has prohibited automotive manufacturers from using this technology. But, according to global marketing manager Pierre Lahutte, this is where the tractor market differs.

Of course you still have to use electricity to electrolise water into hydrogen and oxygen in the first place, but this is where New Holland’s energy-independent farm concept comes in.

The idea is that farmers will be able to produce their own compressed hydrogen from water electrolysis and store it on farm using with electricity generated via renewable sources, like biogas, solar or wind.

Also, it’s easier to stick a hydrogen tank under a tractor bonnet rather than in a car – there’s simply more space.

Up in the passenger’s seat the tractor seems a lot quicker than a standard T6000, with a faster reaction when the foot throttle is depressed. In fact engineers say that, on a straight track, acceleration is enough to shove you to the back of your seat.

In the cab, the tractor is eerily silent. In fact the only sound is the electric motor working, which is a bit like the noise a large radio-controlled tractor makes. And when it’s stationary there is no noise at all, as it doesn’t need to idle.

Essentially, losing the combustion engine and the usual gubbins which goes with it means that reliability could be a lot greater as there’s less to go wrong. Not only this – but getting rid of what’s under the bonnet could lead to a redesign of the architecture of a typical tractor.

The usual vertical exhaust pipe is gone, too – all you can see is a small pipe under the cab that lets the water (the only by-product of the fuel cell) out.

Instead of the standard rotating beacon, the cab is topped-off by a strip of LEDs which “chases” round the edge of the roof. These modifications could be added to ranges already in production, before the launch of the fuel-cell tractors.

When and how much?

Not surprisingly, no price tags have been mooted and the €300,000 cost of the fuel cell alone illustrates the fact that this a tractor still some way from production. But the cost of the prototype, at €500,000, is about the same as that of a normal prototype.

The real question is to how expensive fuel cells will prove to be in 2013. “All the technology is there and companies are already using it. It’s only the cost of the components that are prohibitive,” says Mr Lahutte.

But put these into mass production and cost could reduce dramatically, he adds. “It all depends on how the automotive industry adopts the technology.”

New Holland reckons that a 130-140hp tractor would be the most likely to use the technology, because it’s the most commonly sold and runs for more hours, meaning the return on investment would be greater.

There’s no real limit in terms of horsepower, though. “The bottom line comes down to payback. It’s just a case of stacking cells to produce the amount required.”

There’s a second-generation prototype already waiting in the lines, and expected on farm in 2010. New Holland says it plans to have NH2 production models by 2013-15.