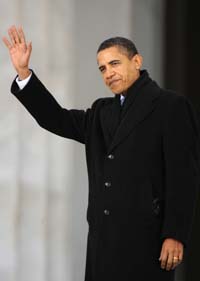 Farmers in America are trying to persuade new president Barack Obama to grow food on the White House lawn to encourage people to think about food security and sustainability.

Pressure groups claim turning the South Lawn into a fully-working farm could set an example for millions of Americans to produce their own food.

Casey Gustowarow, the farmer behind The White House Organic Farm Petition, a group which has collected 10,000 signatures calling for a presidential farm, said school children should be invited into the garden to learn about growing food.

He said he would continue to collect signatures from across America until a farm is installed at the famous address.

Agriculture has been associated with the White House in the past – sheep were brought in to mow the lawn in 1918 in an effort to conserve resources during the war.

In 1943 a victory garden was planted by Eleanor Roosevelt in a bid to encourage people to grow their own food.