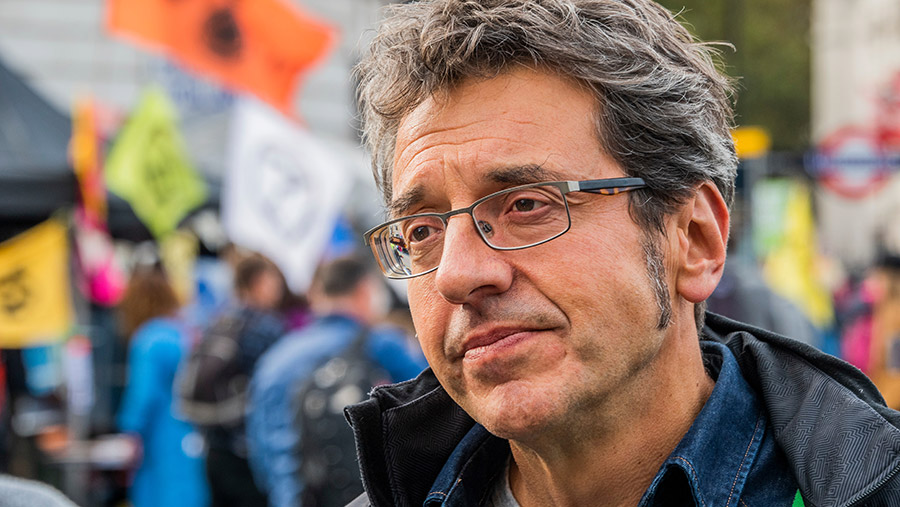 Environmentalist George Monbiot came under fire at the Oxford Real Farming Conference for his Channel 4 documentary suggesting that meat is killing the planet.

A panel discussion with Mr Monbiot on Thursday (9 January) came the day after the screening of his programme Apolalypse Cow: How Meat Killed the Planet.

Mr Monbiot argued that beef and sheep farming is bad for the rural environment and has led to the release of greenhouse gasses – adding to global warming.

Rather than agriculture, the answer to feeding the world sustainably is in the laboratory, including the production of non-animal meat and protein flour derived from bacteria.

But food critic and author Joanna Blythman said society had “lost the plot” when fake meat burgers were portrayed as more acceptable than a lamb chop from a British hillside.

“I am running out of patience with plant-based proponents who use the worst examples of factory farming as a broad brush with which to smear all livestock farming,” she said.

“I expect this from extremist vegan organisations.

“They don’t seem to [have] any hands-on experience or in-depth knowledge of food production, farming, even cooking – animal or otherwise.

“These tunnel-visioned evangelists have swallowed hook, line and sinker the generic lies and distortion they have picked up online.

“But from people like George, to be honest, I find such arguments intellectually dishonest. I feel he should know better.”

Organic food campaigner Patrick Holden said he had been a George Monbiot fan for many years, but had felt increasingly uncomfortable as he turned his attention to food

Ruminant livestock were in the UK because they grazed the clover and grass that helped to build natural fertility in farmland soils, said Mr Holden.

It was wrong to view grassland and the meat as separate from arable production, he argued.

Mr Monbiot had built his position on exaggerated claims, occasionally misquoting sources and global statistics not relevant to the UK, said Mr Young.

This was a tactic used by many vegan campaigners who spoke about the UK and then switched to global statistics when it suited them.

Mr Young disputed Mr Monbiot’s claims that the carbon cost of eating just 4kg of beef was equivalent to flying to New York and back.

Exaggerated claims gave the false impression people could carry on flying around the world so long as they cut back on red meat, added Mr Young.

In response, Mr Monbiot said: I have spent my whole life telling people what they don’t want to hear, so this isn’t much different to me.”

“It is very striking to me how the other panellists – with the partial exception of Peter [Segger] – have not been engaging with the environmental crisis that is heading our way.

Climate change threatened global food supplies and was greatly exacerbated by the way food was produced, and the biggest issue was the amount of land it used.