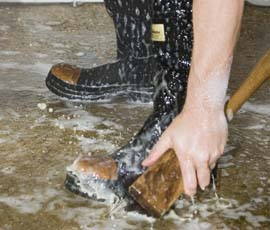 The British poultry industry has set targets to cut campylobacter in chicken to a level of 10% – a move which could prevent 90,000 cases of food poisoning a year.

The Food Standards Agency and the poultry industry have jointly implemented an action plan at farm level which calls for improvements in important biosecurity measures. The measures include vehicle washing, hand washing for all farm visitors and personnel, boot changing between chicken houses and the disinfection of drinking tanks and washing lines.

Biosecurity for catching teams will come under most scrutiny. FSA Scottish chief, professor Charles Milne, said there was a strong link between the thinning of bird populations by catching teams and the subsequent infection of remaining birds in the flock.

He added: “Catching teams go from farm to farm and take their gear with them. We want to see more washing facilities for these teams on farms and clean areas where they can go on their breaks.”