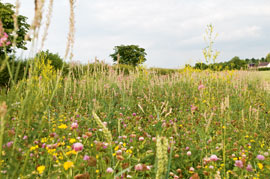 Farmers are considering their autumn cropping plans and the temptation to increase acreages and cash-in on record cereal prices is strong.


But although increasing your wheat and oilseed rape acreage may thicken your wallet, it could also lead to a collective failure of the Campaign for the Farmed Environment (CFE), warns campaign project co-ordinator, Corrina Gibbs.

“With just less than one year remaining of the Campaign for the Farmed Environment, it is critical that everyone backs the campaign and puts 3-4% of their arable areas into campaign voluntary measures or a combination of voluntary measures and key target options in Entry Level Stewardship,” Miss Gibbs says.

“If the campaign fails, the government has warned that in its place will be regulation, resulting in more red tape and expense for all.”

Robert Hall, an agribusiness consultant at Savills, says growers are in control and their cropping decisions will ultimately decide whether CFE succeeds or fails.

“Quite simply, if the farming community doesn’t step up and renew Entry Level Stewardship (ELS) agreements and back the voluntary campaign, then we will get a compulsory scheme,” he says.

“The economics of not having a choice and taking around 6% of land out of production will put farmers in a much worse situation financially than if they choose to join ELS and support the campaign.”

With wheat and oilseed rape prices being so high, Mr Hall admits that his farming clients are thinking about that extra acre, which could deliver an additional £300-400 profit on the bottom line.

However, once they sit down and do their sums, they realise that renewing their ELS arrangements is better than a compulsory set-aside system, he says.

“They are concerned that some growers will spoil it for the rest if not enough people take it up as an industry,” he adds.

Ian Backhouse, NFU combinable crops board chairman, urges growers to take a look at their farming systems and consider measures they can introduce on farm, ideally by joining ELS.

Despite current grain prices, he believes that renewing your ELS agreement and opting for key target options makes financial sense.

“Many options are located on marginal areas of fields where you are never going to get your best yields,” he says.

“The key ELS targets are land uses that encourage biodiversity and wildlife and we must concentrate on introducing these to make the campaign succeed.

“There are land management costs to bear in mind when taking land out of production, but if we return to set-aside everyone would pay a bigger penalty.” Lincolnshire grower Chris Godson says his family farm entered ELS last May after the case for CFE won them over.

With the help of a FWAG adviser, around 4% of farmland – 20 out of 525ha of arable land – has been taken out of production for agri-environmental options.

“The bulk of our options are in-field options, such as buffer strips along watercourses, but we have a 1.6ha (4-acre) field that we have fallowed and three wild bird seed plots,” says Mr Godson.

“Although oilseed rape is £400/t and wheat is £200/t, every farm has bits of land that are less productive and it is these areas that we have chosen to concentrate our options on.”

The paperwork and administration time for ELS is not as extensive as he feared, he says. “Once you get set up and you are up and running, it’s not too bad really.”

Mr Godson says a return to set-aside would be disappointing and would affect his business financially. “If we had to take 6% of our land out of production, that would eat into some of our productive land, which would be seriously disappointing.

*For the CFE to succeed farmers are recommended to renew their ELS agreements and replace the points they have lost with management plans with a third of points into key target options.”

For more information, visit the campaign website www.cfeonline.org.uk or better still get face-to-face advice from local campaign co-ordinators and farmers supporting the campaign at the CFE Cereals stand.