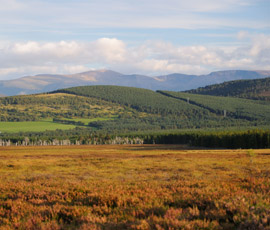 The Scottish farming industry’s fears that vast swathes of the country are about to be lost from food production and turned into forestry appear to have been allayed by a new Scottish Government report into woodland expansion.

It was the Scottish Government’s own highly controversial target of planting 25% of the country in trees by 2050 and reports of whole farms being turned over to forestry which led to industry concerns and the creation of the Woodland Expansion Advisory Group (WEAG) last summer.

The group, with 19 members from farming, forestry, conservation and the environment sectors, analysed the impact of woodland creation on livestock farming and concluded that creating 100,000ha of woodland over 10 years on such land would, at worst, cause a 2% reduction in livestock numbers.

The report states: “This impact can be further reduced by taking advantage of opportunities for further integration of woodland with farming systems and with deer management.”

There has already been some growth in afforestation in Scotland over the last year, although the WEAG acknowledged that without buy-in from all land-based sectors it would be difficult to meet the government’s longer-term aspiration of 25% of woodland cover.

NFU Scotland president Nigel Millar said the 24 recommendations laid out by WEAG struck a balance between farming and forestry and, if adopted, should help ensure the right trees were in the right places.

He added: “The targets and expansion for plantings are pitched at a more appropriate and realistic level in WEAG’s report.

“At farm level, woodlands can form an important part of the economic and management mix, providing income streams and shelter for stock. However, wholesale planting of farms can have a significant impact on areas and there is a recognition that the planting of whole units is a significant risk factor in rural communities and would be subject to particular scrutiny in the planning process.

“These recommendations suggest taking a more localised and considered view of planting plans to assess just what impact any large scale planting may have on the agricultural viability of an area.”