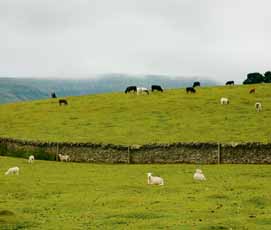 Sweeping changes are to be made to Wales’ controversial farmland management scheme, before it has even begun to make payments.

A review was set up to establish what could be done to make the Glastir scheme more attractive, after fewer than 3000 farmers applied to join in 2010.

That group has now published a long list of far-reaching and detailed recommendations.

In total, the review group made 70 recommendations and although Wales’ rural affairs minister, Elin Jones, has not accepted all of these, group chairman Rees Roberts said he was hopeful the key changes would be taken up.

Some of the changes resulting from the recommendations will be implemented immediately and will therefore be open to current applicants whose contracts begin on 1 January.

Other changes will be made further down the line, but these can be incorporated into existing contracts.

The application process will get a complete overhaul to make it more farmer-friendly. Parts of the original scheme which could have proved a barrier to many farmers will also be changed, according to Mr Roberts.

One of the most significant changes is to the number of points needed per hectare to enter the scheme. This has been halved to 14 points, but payment for this entry level will also be cut by 50%.

“Our recommendations are based on making the scheme more attractive and accessible to farmers so that farming for food production can continue to work in harmony with safeguarding and enhancing the environment,” said Mr Roberts.

But farming unions have expressed disappointment that some of what they see as important issues have been rejected.

NFU Cymru had fought hard to include dry stone walls as a points-scoring option, together with the management of scrub habitat, bracken spraying, a mixed stocking premium, recognition for hardy traditional breeds and liming for environmental gain.

It is pleased however that the recommendation to use the 2010 gross margins and input costs has been accepted.

NFU Cymru president Ed Bailey said that despite the overhaul the union still believed that tweaking existing agri-environment schemes and retaining the Tir Mynydd scheme would have been the better option.

The Farmers’ Union of Wales argued that until Glastir payments were reviewed, the scheme would remain unattractive to farmers. A review of these is to be undertaken, but it will not begin immediately.

“We now fear that the costings exercise, which was considered urgent by the group, is going to take a while to complete,” said FUW president, Gareth Vaughan.