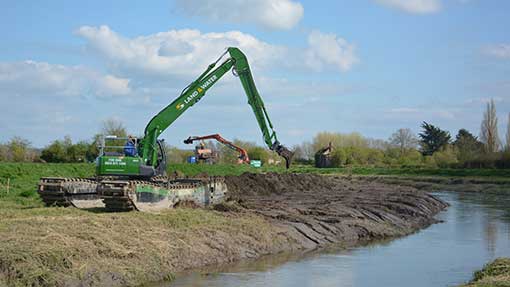 The Environment Agency is increasing the number of dredging teams working on the rivers Parrett and Tone in Somerset, amid concerns that the work has been too slow.

Following a visit by Defra secretary Owen Paterson to the Somerset Levels last week, the Environment Agency announced that it was stepping up the pace with additional teams and potentially longer working hours. “We showed Mr Paterson the stretch that has already been dredged as well as the current dredging operation,” said spokesman Paul Gainey. “We also showed him how the silt has been used to reinforce banks and ploughed in as a soil conditioner.”

So far the EA had dredged just 10% of the planned 8km, sparking anger among local farmers and residents. However, Mr Gainey insisted that the EA would meet its target by the end of October.

“We’ve had two teams working on the River Parrett and have just brought in a third to start on the River Tone,” he said. “By July we will have six teams working, and we’re also looking at the possibility of extended hours and weekend working.”

As it took a long time to get plant on site and establish correct working practices, it was always going to be a slow start, added Mr Gainey. Workers had also been spraying off invasive plant species like Japanese knotweed to keep the watercourses clear. “The Internal Drainage Board are happy that we’re doing a full dredge in line with expectations, and we always knew that we would have to accelerate the numbers as we progressed.”