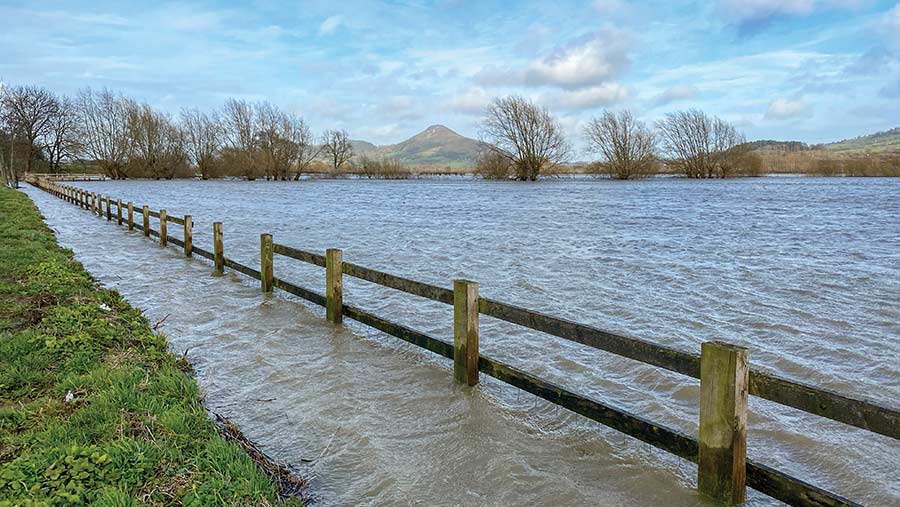 Farmers in Shropshire have raised concerns about proposals to build a dam on the River Severn that could flood thousands of hectares of productive farmland.

The structure is being considered by Shropshire Council and the Environment Agency to manage the flood risk along the yet-to-be-built North West Relief Road (NWRR), north of Shrewsbury.

Officials working on the Severn Valley Water Management Scheme (SVWMS) claim it would protect up to 3,000 homes and 1,000 businesses from flooding, from Shrewsbury to Worcester.

But if the dam gets the green light, it could devastate farms and have severe implications for communities north of the structure and across the Welsh border, say farmers.

See also: 6 tips on managing maize and grassland after flooding

The NWRR will not include any water-retaining structures when plans are submitted in February. Plans will instead contain a viaduct. However, Shropshire council confirmed a flood-alleviation scheme could be joined with the project at a later date.

The Environment Agency has yet to release an impact survey to show exactly how communities along the river will be affected by proposals. The agency says it is still working on sketches to show the dam or embankment contour sizes.

They claim they were told by a representative from Shropshire Council that if the dam goes ahead, they would be compensated through the Environment Land Management (ELM) scheme, which is still in its infancy.

The consultation is open and will close on 7 December 2023. For more details and to submit your views go to the SVWMS website.

Sarah Faulkner, NFU environment adviser, says the NFU had reservations about what it had heard so far.

“If farmland is used to provide flood protection for other areas, this must be planned, agreed and appropriately funded. The wider ecology of the river catchment also needs consideration.”

She says there may be opportunities through the new ELM scheme or other initiatives for farmers to be paid to use their land to deliver public goods and this could include water storage. However, she added that the detail of such initiatives was yet to be explored and agreed.

“We think it is important that opportunities to store and manage water on a voluntary basis across the catchment are fully explored before engaging in engineering projects that might affect productive farmland. That is particularly so where this is against the wishes of landowners and farmers.”

There has also been talk about compulsory purchase of land and houses badly affected.

He adds: “Under standard planning rules, local authorities must take into account the effects a development have on the individual circumstances of the businesses occupying land, subject to an application for change of use where they are not the applicants for the planning consent.

“Tenant farmers must be involved in all consultations and discussions and treated equally with landowners and owner-occupiers.”

North Shropshire MP Owen Paterson says he is “wholly opposed” to any form of barrier.

Mr Paterson says: “My experience of being a local MP for 23 years is that we must manage the whole river system, including the tributaries to the Severn. We need to slow the flow at the top, holding water back, with more reservoirs and more planting.”

He adds: “When the river does rise, we need to ensure that the water gets away as soon as possible once it starts to drop. This means ensuring a properly maintained system of sluices and local drains.”

Mr Paterson also says his time as Defra secretary taught him the overriding, clear lesson was to keep the rivers clear and dredged regularly.

“Rather than arbitrarily cutting off the water just north of Shrewsbury, we must work with the Welsh authorities to make sure we are slowing down the water in tributaries such as the Vyrnwy and the Tanat,” he stresses.

The Environment Agency was contacted by Farmers Weekly, but declined to comment at this stage.

One of the communities set to be worst affected in Shropshire is Melverley, where it is estimated the dam would increase water levels by 12.5-15cm.

Richard Bowdler, who milks 700 cows at Melverley Hall Farm, says it could double the area of his land that floods. 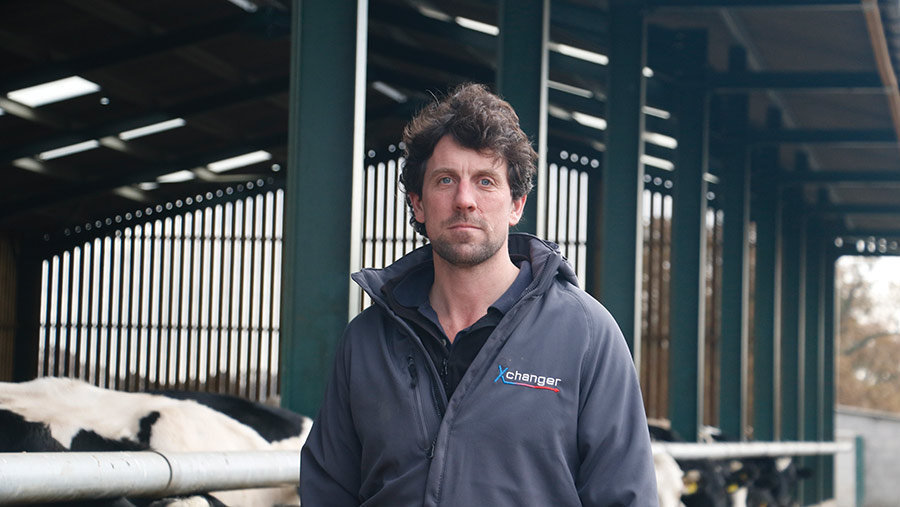 “In a normal year, about 55-80 acres of our land floods, and we can manage that. But if the dam goes ahead, it would make a one-in-20-years flood a normal occurrence for us, flooding up to 130 acres of our farm,” he explains.

The most recent flood in February 2020 cost Mr Bowdler £60,000; 47ha of land had to be reseeded and he lost 800t of feed that had to be replaced. He says if this becomes more frequent, it could make his business unviable.

Mr Bowdler is concerned the water will breach the farm buildings, putting cow and staff welfare in jeopardy. He relies on local farmers to grow maize and grass to feed the cows, and says all of these farms will be badly affected by the proposals.

Mr Bowdler is also concerned about the implications it could have for slurry storage. Like many farmers along the River Severn, he is in a nitrate vulnerable zone.

If flooding gets worse, it won’t be safe to put muck out, even after the closed period ends, for fear of pollution, he reckons.

“If you took the £60,000 the 2020 flood cost us and divided that by the land flooded, we would need to receive about £350-£400/acre as compensation. The government are not going to give us that. They can’t afford it. We are already in the biggest recession on record. Where is this money coming from?

“Look at HS2. It has taken years. Farms have been ripped apart and farmers still haven’t received compensation.”

Third-generation farmer Sam Barker may be left with just 20ha of his tenanted 85ha farm near Shrewsbury if the project goes ahead.

The dam would be just downstream from Mr Barker’s Great Berwick Farm, where he runs a herd of 300 grass-fed, organic Longhorn cattle. 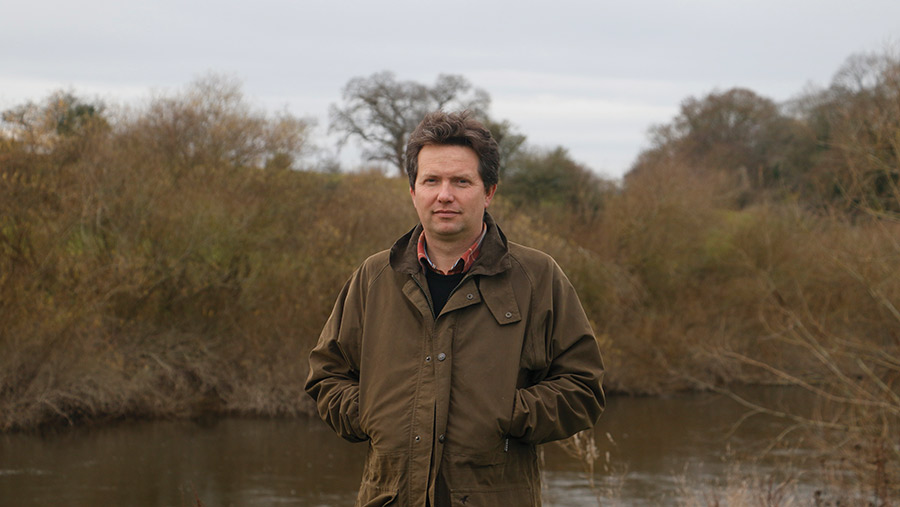 Only 20ha of the farm is currently prone to flooding, but this could increase threefold. He says he would be forced to cut cattle numbers so significantly it would make the business unviable, with river levels rising by about 5m across the farm.

“I would be looking out from our house at either mudflats or a lake with the shore lapping at the garden,” explained Mr Barker.

He farms in harmony with the environment and is doing lots to promote natural habitats for wildlife. The whole farm is in Higher Level Countryside Stewardship and practises good flood management by undersowing crops to ensure soil is never bare.

“The dam couldn’t be more extreme than what we are trying to achieve. I can’t understand the Environment Agency, which preaches about helping the environment, is considering being so destructive to so many thousands of acres of farmland.

“They will turn our farm from a wildlife haven into a monoculture of a temporary lake or dried-out mudflats.”

The Barkers have lived on the Berwick Estate since 1949 and Mr Barker hopes his children, Tom, 13, and Eleanor, 11, will one day carry on the family farming tradition, but their future looks bleak if proposals go ahead.