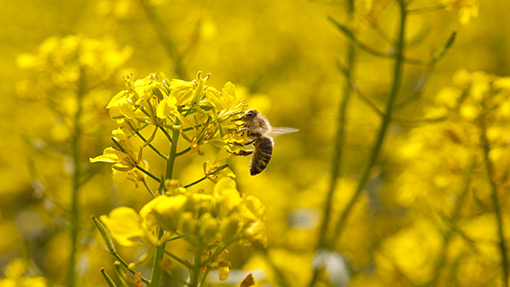 Scientists are calling for an “evidence-driven” debate over whether neonicotinoid pesticides are to blame for a decline in bees.

The European Commission introduced a ban on three neonicotinoids last December amid fears they were harming bees and other insect pollinators.

A restatement of the scientific evidence on neonicotinoids was published by scientists from Oxford University in the journal Proceedings of the Royal Society .

Professor Lin Field from Rothamsted Research helped produce the study and said it was vital to look at evidence rather than opinion.

“It is essential that we base decisions in this important area on science, so that we find the best way forward to ensure both pollinator success and good crop protection strategies for food production.”

Earlier this year, scientists called for more realistic pesticide studies looking at the effect of neonicotinoids on bees in the field .

One of the lead scientists in the latest study, Professor Charles Godfray, said although pollinators were clearly exposed to neonicotinoid insecticides it was seldom to lethal doses.

“We need a better understanding of the consequences of realistic sub-lethal doses to the insect individual, bee colony and pollinator population.”

Responding to the study, Defra chief scientist Ian Boyd said it was “essential” that policies on the use of pesticides were “built on sound scientific evidence”.

He added: “This paper provides an independent assessment of this subject, which will provide clarity and authority in order to help people make more informed choices.”

Defra secretary Owen Paterson has insisted there is “no justification” for a ban on neonicotinoids. He has called for more research based on conditions in the field.

Environmental groups have also backed the study, with Friends of the Earth senior nature campaigner Paul de Zyvla, saying it was an “important step toward much-needed public and scientific debate and scrutiny”.