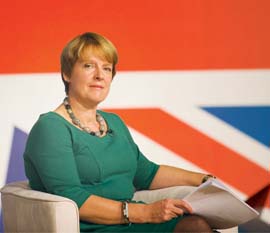 DEFRA secretary Caroline Spelman has moved to end confusion over her stance on the future of direct subsidies.

In an exclusive article for Farmers Weekly (below) Mrs Spelman said she did not want to abolish direct support payments immediately.

But while it would be irresponsible to end payments soon, she did not want to see them “retained in perpetuity”.

Mrs Spelman sparked confusion over her position subsidies after she told the Oxford Farming Conference in January that “now is the time to make very significant progress towards reducing our reliance on direct payments”.

“Rising food prices make it possible to reduce subsidies and plan for their abolition,” she added. Meanwhile, reports from the EU last week suggested she had backed down on calls for a speedy end to subsidies.

George Dunn, Tenant Farmers Association chief executive, said her speech had left the industry thinking she was planning to remove the subsidies. “There’s confusion on direct support, but in our mind the political polemic was subsidies were wrong and CAP debate should be about their removal,” he added.

The Foresight Report published by Sir John Beddington showed us very clearly that the future of agriculture holds many difficult challenges. That report also showed us these challenges are not insurmountable and with these challenges there will also be opportunities.

The British farming sector can rise to these challenges. But it needs a clear path towards a future where markets provide fair opportunities and a level playing field and where businesses respond to international market demands, not to taxpayer-funded subsidies. That is why we advocate truly ambitious reform of the Common Agricultural Policy (CAP).

We have a golden chance to renegotiate the system that underpins agriculture in Europe, at a time when food prices, commodity prices, the need to support economic growth and the challenges of climate change and feeding a growing population have greater prominence than ever before.

This is a unique and critical window of opportunity to change the nature of the CAP to something that will help our industry to adapt to the future.

That is why we are taking a new approach, working positively in the EU to achieve genuine and far-sighted reform that will benefit the food and farming sector, as well as consumers, taxpayers and the environment.

This must be founded on a twin-track approach to the future of agriculture. We need to build business skills and competitiveness and so reduce reliance on subsidies. At the same time, we need to encourage farmers to better deliver the environmental goods the public rightly demands and farmers are so ideally placed to deliver.

I want to see an increased focus on competitiveness measures, both inside and outside the CAP – and Pillar 2 can play an important role in this.

I’ve been criticised by those who claim I want to abolish Pillar 1 tomorrow.

Let me make this very clear. I don’t. That was the view of the previous government.

I don’t think direct payments can end immediately and I’ve never said they should. That would be irresponsible, as well as impractical. Direct payments are likely to continue in the next EU budget – albeit with a sharp cut to CAP spending.

I don’t accept this is an industry that will always need subsidies, or that farmers want their businesses to be reliant on subsidies forever. That’s a fundamentally pessimistic view that demeans the potential of British agriculture.

Nor is it fair to ask taxpayers to carry on subsidising an industry forever, with no clear strategy for moving away from subsidy in the future.

Many of the farmers I’ve spoken to are optimistic about their industry and what it can achieve, given fair and responsive markets and the right support at the right time.

That’s why I disagree with those who want to see direct payments retained in perpetuity. But I do believe we can anticipate a downwards trajectory for direct payments. And we should be planning for that time by making sure there is an effective transition that sees the right steps taken at the right time and supports farmers in becoming more competitive and more independent.

The old UK approach was to argue getting rid of direct payments was enough on its own. But measures in the short term to encourage competitiveness and reduce reliance on subsidies are a fundamental part of CAP reform.

Underpinning all of these changes must be a greater drive for simplification. That’s why we’re arguing, with strong support from our European allies, for more simplicity for both farmers and governments, right across the board.

In the UK, we’ve established the Farming Regulation Task Force to look at some of the red tape that is tying up our farmers – and that task force will be reporting to us in the next few months.

Farm minister Jim Paice and I have been talking about our approach in Europe, where it’s clear that Britain is in the vanguard of efforts to look across the board at farming regulation and identify where it can be streamlined and reduced. By showing that it can be done, we’re giving strength to the voices that want to see the future CAP much simpler and much easier to administer. Last week’s agriculture council overwhelmingly endorsed a set of principles for simplification that build heavily on thinking from the UK.

These are complicated negotiations and they will take many months. But we have a duty to the agriculture sector and to our taxpayers to get it right.

There are constraints on public expenditure right across Europe. No government is immune. And overall expenditure on the CAP cannot – and must not – be immune, either.

The UK wants the EU budget to be smaller so our domestic efforts to reduce the national debt are not undermined by growth in EU spending. And making up 43% of the EU budget, the CAP cannot be immune to the hard choices being made elsewhere.

That’s why one of our key aims for CAP reform is to see a reduced and refocused budget that improves value for money and prepares for the future.

And our new, constructive approach is working. At last week’s agriculture council, we were also pleased to see that the Hungarian presidency conclusions took some of our suggestions on board:

* No ritualistic calls for a bigger budget

* No endorsement of a permanent role for direct payments

* Clear support for a greener CAP, but without an endorsement of the commission’s plans to do so through Pillar 1

But there were still some elements for concern in the conclusions. These include a lack of recognition that the overall budget for the CAP will need to be smaller from 2014 and claims direct payments have proved their worth, in the face of clear evidence that they have led to European agriculture’s failure to keep pace with productivity gains elsewhere. I remain committed to an active role for the UK in negotiations, as in these discussions, but that does not mean abandoning our call for ambitious reform.

It’s our responsibility to get these negotiations right and to put EU agriculture on a path to reform for 2020 and beyond. So we will continue to work constructively with the commission, EU parliament, other European countries and UK farming to secure genuine reform.

That reform will help to fit the industry for the future – and our industry is already leading the way in so many areas. Farmers are showing they’re best placed to care for the environment on the land they farm and that they take very seriously their responsibility to manage the land in a way that allows wildlife to flourish. That’s why environmental stewardship schemes are so important, and why in difficult time we’ve increased the budget for Higher Level Stewardship by 80%.

It’s an industry that’s already showing it’s innovative and ambitious – with investment in precision farming, opening up new markets and investing in sustainability.

It’s an industry that’s showing commitment to cutting its emissions, at the same time as it is working to adapt to climate change and I’m looking forward to the launch of the industry’s delivery plan for the Greenhouse Gas Action Plan.

We need a CAP that supports the innovation and effort already happening here and ensures our farmers are rightly rewarded for the work they’re doing to build a greener Britain. And it must ensure the rising generation of farmers inherit a farming industry in this country that is green, competitive and second to none.