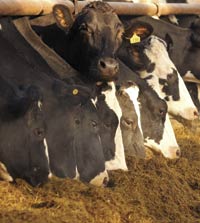 Care needs to be taken when applying slurry following first cut, as contamination and an imbalance of trace elements could result in production losses from poor pasture.

This is according to independent consultant Josephine Scamell, who says contamination and disease risk from second-cut silage last year showed in the clamp, affecting palatability and production.

“Slurry has to be applied directly after first cut, but if farmers have the choice between using slurry or artificial fertiliser, then apply artificial, for the simple reason it doesn’t affect palatability,” she says.

Slurry injection does reduce the risk of contamination, but at a cost which Mrs Scamell believes is justified. “Yes it does cost more money to inject, but if you don’t and you end up with poor palatability and uptake by cows, then you will end up spending more money on buffer feeding, which will be ongoing,” she says.

However, according to dairy consultant Phil Clarke of P and L Agriconsulting, if you get slurry on stubble within the first three to four days after first cut, then contamination will be minimal if at all.

“The longer you leave slurry application post-silaging, the more likely residual slurry will be left on grass, which ultimately affects palatability. But if you apply at the right time and there is enough rain to wash it in, then palatability shouldn’t be a problem,” he says.

But it’s not just slurry contamination affecting palatability; a lack of sodium in the grass could also see reduced intakes. And with slurry and dirty water containing a high level of potash, but often low levels of sodium, application of rock salt may also be necessary to balance the ratio, says Mrs Scamell.

“First grazing is usually palatable, but in second re-growth palatability can decrease if this potash sodium ratio is unbalanced. Having a correct sodium and potash ratio not only improves palatability, but growth is also better.”

A grass mineral analysis is something both Mrs Scamell and Mr Clarke recommend, and according to Mr Clarke could save money from bought-in minerals.

“Getting grass tested for minerals not only tells you what you are feeding, but will also pick up where there are deficiencies, like an imbalance in sodium. It’s so easy to get minerals out of a bag, but just getting the balance correct in the first place could essentially minimise the need for any additional minerals.”

And at a cost of about £30 for a grass mineral analysis, it’s clear this small investment could save serious money.

But sodium isn’t the only thing many soils are deficient in, as most of the UK is now sulphur deficient, says grazing consultant, Tom Phillips. “Applying ammonium sulphate can have a dramatic impact on the quality of future silage and response to uptake of nitrogen by the grass. Most slurry is reasonably rich in sulphur, but it would be worth getting slurry tested, too.”

Mr Phillips says gypsum, which is currently priced well due to the slump in the building trade, is also a good source of sulphur and could improve nitrogen uptake by grass. This is also an option for organic farms, he adds.