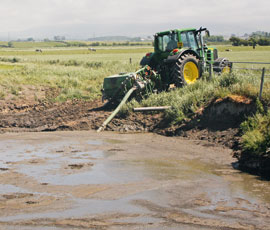 The clock is ticking as the January 2012 deadline looms for the introduction of NVZ regulations. Jeremy Hunt takes a look at some of the storage options available

Increasing slurry storage capacity has been necessary on many livestock farms to meet the new NVZ rules controlling slurry application periods – but some farms have yet to decide on a preferred method of additional storage. Those already geared up for the NVZ restrictions have selected a range of storage options.

Cheshire dairy farmer Stuart Yarwood has worked closely with Environment Agency on his decision to increase slurry storage and opted to extend an existing earth bank lagoon which now provides 1.4 million gallons – an increase of about 60%.

The original earth bank store at Lower Medhurst Green Farm, Brereton, Congleton, was constructed in 1999. The extension, which has just been completed at a cost of about £50,000, will now provide up to seven months’ slurry storage for the farm’s 240 milkers and 100 followers.

“We’re on clay soil and the site was suitably situated to use gravity to move slurry from the buildings to the store, so there was no need for a pump. It was by far the cheapest option,” says Mr Yarwood, who aims to produce 4-5% dry matter slurry.

“It’s important to consider all the options most suited to your own farm. But if you’ve got clay soil and can get slurry to move without the additional cost of a pump, an earth-bank lagoon is a good option.

“On this farm it was the most economical and most effective way of increasing our slurry storage. In the original lagoon we had to do some occassional repairs, but it’s important to use an experienced contractor.

“When we constructed the extension we took great care when the top soil was removed. It was stacked separately so that it could be replaced once the work was complete to help the top of the lagoon become stabilised as quickly as possible.”

Andrew Penton of the Environment Agency says all storage on farms should be constructed to standards laid down in the Slurry Silage and Agricultural Fuel Oil regulations.

“All storage structures should be built to have a 20-year life expectancy and be more than 10 metres way from water courses. Farmers must inform us of any new structure before it’s used.”

An assessment of where savings could be made on fertiliser use encouraged north Yorkshire farmer Stephen Crabtree to invest in a slurry separator system on his farm on the Bolton Abbey Estate, Skipton.

“We looked at how we could save on N, P and K and this system has the potential to cut several thousands pounds off of our fertiliser bill over the next 10 years – and that’s at today’s fertiliser prices which aren’t likely to come down,” says Stephen.

About 500,000 galloons of slurry are produced by housed suckler cows and finishing cattle, but the separation system will increase storage capacity by up to 25%. The system, which was grant-funded, cost £45,000.

“We aren’t in an NVZ, but the grant was available and it meant we could do something that would benefit the environment and save on fertiliser costs.”

Although the separator means liquid can be stored for the entire winter, there may be a need to invest in a new store for the solid material.

“There are more solids than we expected, but it’s certainly not a problem considering all the other advantages.”

A plastic slurry bag has been used on the Lancashire farm of Andrew Clark for the past five years. The heavy-duty bag measures 27m x 27m and is sunk into a 2m earth pit. When carrying its full capacity of 390,000 gallons, the bag rises another 1m above the side of the pit.

“It’s like a huge cushion. It has an estimated life-span of at least 20 years and gives us up to six months storage. The pipe that feeds the slurry enters from underneath. It’s a simple and straightforward way to store slurry” says Mr Clark, who also has an Alfa Laval sealed slurry store as back-up to cope with around 180,000 gallons.

“We bought the bag at a time when the price of steel was rising and concrete stores weren’t very popular. Suppliers weren’t as keen as they are now and so the bag looked a good buy at about £40,000.”

The bag is fitted with a mixer which protrudes through the top. “The bag is durable and can be walked on when it’s full. The only issue we have is that it’s sometimes difficult to get all the slurry out of the bag. The bigger bags have up to three mixers and it may be that even this size warrants more agitation.”

A concrete slurry store with a 777,000 gallon capacity was constructed 18 months ago at Hilltown Farm, Molland, South Molton, on the edge of Exmoor. After fully evaluating a range of storage systems, the Nicholls family reckoned a concrete store would provide the most effective method of meeting NVZ regulations.

“We looked very carefully at everything in terms of the longevity, corrosion resistance and economic installation and could find nothing to beat a concrete store.

“Some farmers believe they are the most expensive system of slurry storage, but we didn’t find that when we looked at overall costs. Steel tanks have an operational life of about 30 years, while a concrete tank is claimed to last three generations.” says Mervyn Nicholls, a partner in the family-run farm that milks 220 pedigree Ayrshires alongside 230 head of youngstock on 420 acres.

The Macrete store is fitted with an Aeromixer system and includes safety fencing and a slurry grid. Total cost -including a reception pit – was about £120,000 in 2009.

The Nicholls family say it was essential to have “total control” of their slurry storage and its use.

“Efficient management of the nitrogen in the slurry makes it a highly valuable resource. We’ve been spreading slurry as fertiliser on this farm for 35 years. Because potash and phosphate levels are sufficient we don’t need supplementary fertiliser.

“The slurry provides what we need on the grazing land; bagged fertiliser is only used to complement soil analysis and to provide trace elements, but the slurry is a very important part of the way we manage our grassland,” says Mr Nicholls.

The store provides storage from mid-October until mid-March and is expected to be maintenance-free. It is fitted with a slurry agitation system to create balanced slurry of consistent quality.

“It ensures we can make the best use of the slurry by soil injection rather than surface spreading. It’s applied to pasture land in precisely the correct the quantities and at the appropriate times using an injection tanker.

“Slurry analysis has shown it is worth £25 for every 1,000 gallons we spread at current fertiliser prices. Our investment in the large capacity slurry tank has been a substantial one but it was essential and will pay for itself in fertiliser cost savings over in between five and seven years.”