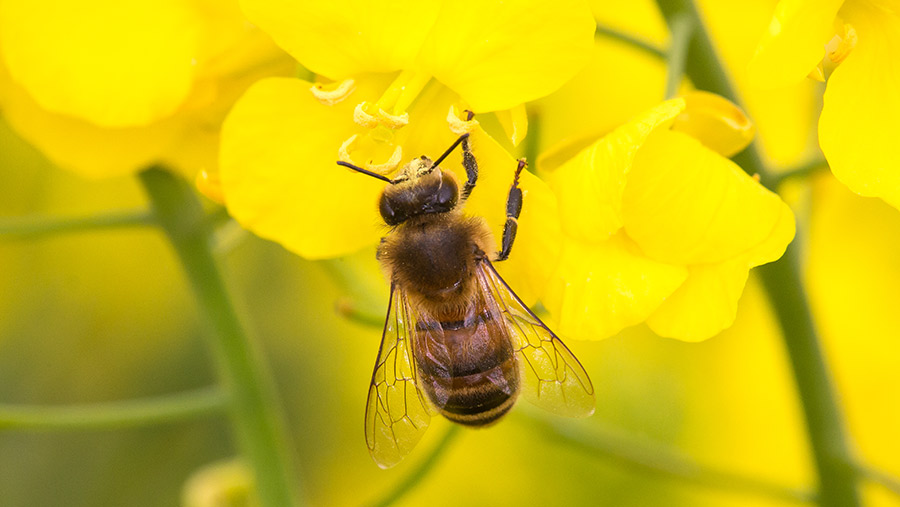 Wildlife-friendly farming can have a lasting, positive effect on wild pollinators in both rural and urban landscapes, according to the findings of a new study into Britain’s pollinators.

The UK is home to hundreds of different pollinators that benefit both the yield and quality of crops. Studies have suggested their activity is worth nearly £700m to UK food production each year.

It showed about one-third of species had experienced declines during this period, raising concerns about the future of food production and biodiversity.

However, the report points to an “unexpected finding” of the study – the increase in key bee species responsible for pollinating flowering crops, such as oilseed rape.

This could be in response to the large increases of mass-flowering crops grown during the study period and government-subsidised schemes, such as Countryside Stewardship, that encourage farmers to plant more of the sunflowers they feed on.

Agri-environment measures such as farmers growing wild flowers in field margins and restoring hay meadows, are believed to have contributed to a 12% increase in dominant crop pollinators.

Study leader Gary Powney, from the CEH, said there was “no one single cause” for the overall decline in pollinators. But the combination of habitat loss, climate change and pesticide use are a “likely driver of the declines”.

Dr Powney said: “While the increase in key crop pollinators is good news, they are still a relatively small group of species. Therefore, with species having decline overall, it would be risky to rely on this group to support the long-term food security for our country.

“If anything happens to them in the future, there will be fewer other species to step up and fulfil the essential role of crop pollination.”

The researchers said there is an urgent need for more robust data on the patterns and causes of pollinator declines.

Responding to the study, published in the journal Nature Communications, Defra said it was taking action to help increase the number of pollinator-friendly landscapes as part of the government’s 25-year environment plan and National Pollinator Strategy.

A Defra spokesman said: “It is critical that we act now to ensure we leave our environment in a better state for future generations.”