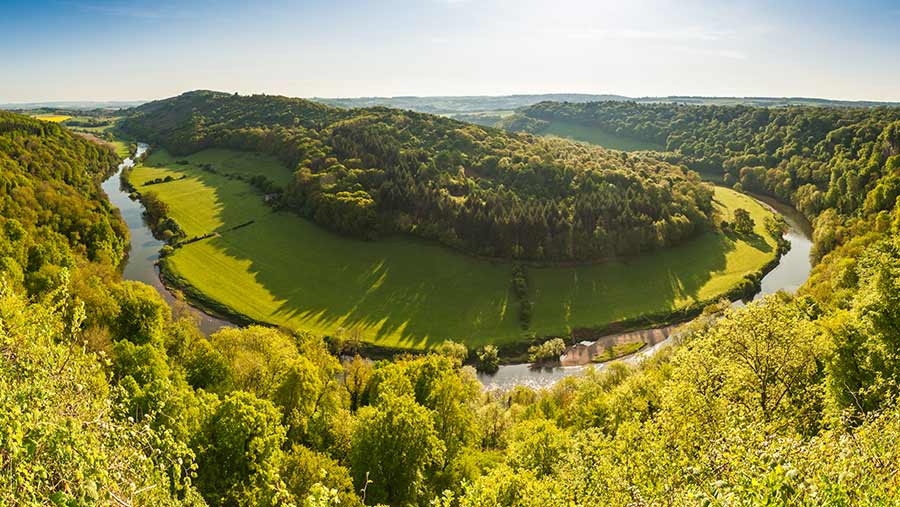 Farmers in Herefordshire are taking steps to reduce phosphate levels in the River Wye and bring the catchment back into balance, having recognised the scale of the problem and the considerable change required.

At a meeting organised jointly by the Wye and Usk Foundation and local farmers on Tuesday (3 August), three main sources of excess phosphate were identified: livestock manures, sewage cake and digestate, with the catchment running at a surplus of 2,000t of phosphate each year.

This means farming in the county is contributing as much as two-thirds of the phosphate found in the River Wye, confirmed Kate Speke Adams, head of land use for the Wye and Usk Foundation, who also highlighted “leaky” soils and land management practices as key issues.

“We’re all trying to figure out how to reduce it, so it’s encouraging to see farmers and other stakeholders working together to tackle this issue,” she said.

Phosphate stripping technology, various manure application and treatment options, and supply chain intervention are all options, so that workable guidance can be put in place for continued and appropriate manure use.

Ms Speke stressed that farming was just one of the contributors, and solutions would have to come from everyone involved, including the water treatment and poultry sectors.

Shane Rothwell of the University of Lancaster, who has been studying the Wye catchment as part of the RePhOKUS project, pointed out that livestock dominated the phosphate flows.

Key drivers for phosphate losses in the Wye catchment

“At the moment, soil P input exceeds crop demand by 30%, so phosphate is accumulating every year,” he said. “The main movement of phosphate is in manures, so changing how they are used will help.”

The two main options were processing and exporting the manures, and reducing livestock numbers, he said.

The huge reserve of phosphate in Herefordshire soils, known as legacy P, was also contributing to the water quality problem, Dr Rothwell said. “This surplus is mobile and can end up in the river.”

At current levels, it would take between five and 15 years to draw down this excess phosphate through cropping, he added.

What farmers are doing

Martin Williams, who farms in Fownhope on the River Wye, has stopped applying sewage cake and has reduced his use of chicken litter, in efforts to prevent soil and phosphate losses to water.

He has also introduced buffer strips and 6m margins, as well as establishing permanent grass by the river, so that the watercourses have protection.

Mark Wood, farm manager for JPF Clay at Fawley, has changed the farm’s rotation by dropping potatoes and reducing the area of spring crops, so that bare soil and erosion are minimised.

He has also done some arable reversion, put in margins, and works with the Wye and Usk Foundation to make continual improvements to farm practice.

Jamie Rogers, who farms at Hampton Bishop, has made the decision not to apply any organic manures to soils with a P index of 2+.

“We don’t need the phosphate in these materials. Our soils can’t hold all the P that’s being put on, so it makes sense to stop using them if the soil is already at 2 or above,” he said.

High-risk farm sites on the Wye are being identified by the Environment Agency so that visits can be carried out and collaborative plans developed.

In the past 10 months, 273 farm inspections have been completed, with 80% of the sites being compliant.

There were 12 serious incidents and 57 breaches reported, but Andrew Osbaldiston of the Environment Agency said there had been considerable improvements and a willingness to engage from local farmers.

He favoured sustainable treatment of manures as a potential solution, so that treated materials can be exported to parts of the country where soils are deficient in P.