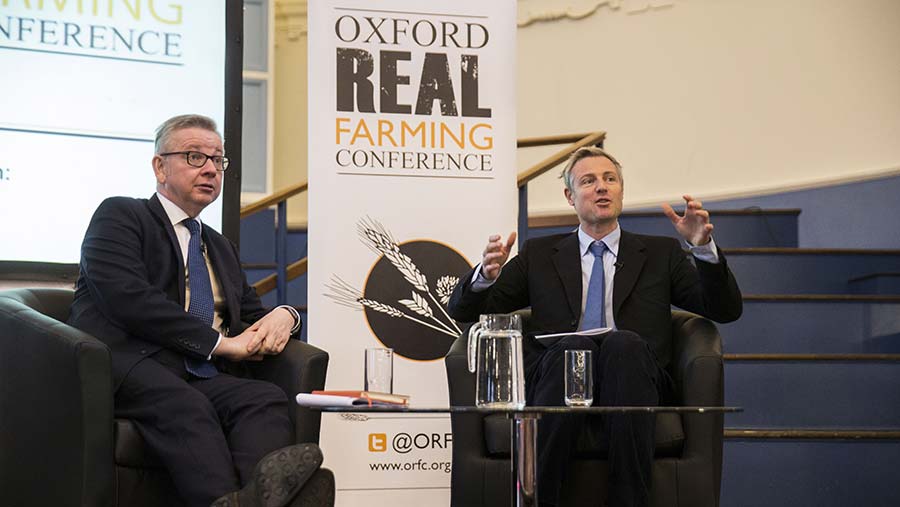 Defra secretary Michael Gove was on upbeat form as he took to the stage at the Oxford Real Farming Conference on Thursday (4 January) – the first Cabinet minister to address what is viewed as the “alternative farming conference” in Oxford.

In a Q&A session with Richmond MP Zak Goldsmith, followed by an open debate with the 400-plus delegates, Mr Gove shed more light on his vision for a post-Brexit farm policy.

The following is a selection of quotes:

1. On the Basic Payment Scheme:

“The £3bn we currently have to support agriculture is poorly spent. We give 80% of that money through the BPS scheme purely on the basis of the amount of agriculturally productive land.

“Public money often goes to those who have the largest and deepest pockets. Worse than that, BPS rewards inefficiency and unsustainable agriculture. It means that any part of your land or holding which is not turned over to productive agriculture does not count in terms of the amount of money you get.”

2. On public money for public goods:

“The heart of farming is always going to be about food production. But ultimately, public money should go towards people who are working hard in order to ensure that our environment isn’t harmed.

“If we are going to have £3bn spent, then that £3bn should be an investment for the future, rather than an incentive to carry on just as people have been doing ever since the Second World War – farming in an intensive way.”

3. On help for new entrants and small-scale farmers:

“It is time to change the way in which we procure food. We need to think not just about cost, but whether the food we are giving schoolchildren, or in hospitals, actually helps to promote public health and comes from the right sources.

“Also, if you use the tool of public procurement to set high standards, then that can drive more and more people to improve the quality of what they produce, and that means they then have an advantage in the marketplace.”

5. On a drive to organic production:

“I certainly think that we should move towards a more sustainable method of agriculture, and it is true that the organic movement has done amazing work. But it is difficult to prescribe that every farmer should meet the high standards of the Soil Association to be fully organic.

“If any more farmers would like to go down that route, then part of my responsibility is to make sure that public money can help them do so.”

6. On wishing to ban neonicotinoids, but not glyphosate:

“With neonics, the scientific advice has moved decisively in favour of restricting their use. With glyphosate, it is less clear-cut. Also, many of those people who are trying to move towards more sustainable forms of agriculture – for example, min-till or no-till methods of cultivation – use glyphosate as a tool.”

7. On whether free-trade deals will lead to lower standards:

“Secondly, trade deals live or die on the basis by which the public are prepared to support those changes. If we were to secure a trade deal with, for example, the USA, if some of the aspects caused concerns for UK citizens here, then it would be unlikely to get though the House of Commons.”

8. On whether the ‘pro-environment’ agenda would last beyond a Cabinet reshuffle:

“Across the House of Commons, in all parties, there has been a move to take environmental issues more seriously, which is reflecting what’s happening in society overall.

“So if I disappeared tomorrow, whoever my successor might be would be responsive to those currents – and I am reassured that the prime minister is also enthusiastic in backing what we have been doing.”

9. On how to balance economic growth with more sustainable farming:

“In the past we have powered economic growth with a model that relied too much on debt and also in a way that was not properly respectful of the Earth’s own resources. This needs to be rethought. But economic growth can still be generated by innovation, creativity and the exchange of ideas.

“However, we do have a challenge as there are certain resources which, by definition, are finite. We cannot continue to say to the next generation, you’re going to have to cope with the debts we’ve incurred and clean up the mess we’ve generated.”

10. On support for upland farmers:

“When it comes to making sure that our uplands are healthy, it’s not just about the grasslands, but also the human dimension. There has been huge human investment in the hills, so you must have a care to the way it is not just sheep, but humans who have been hefted.

“OK, there may be upland areas that may be appropriate for forestry, but we can’t have anything other than a respectful attitude to upland hill farmers who operate on very tight margins. Much of what they have done has been to keep alive ways of life and communities in a way that is deeply worthy of respect.”