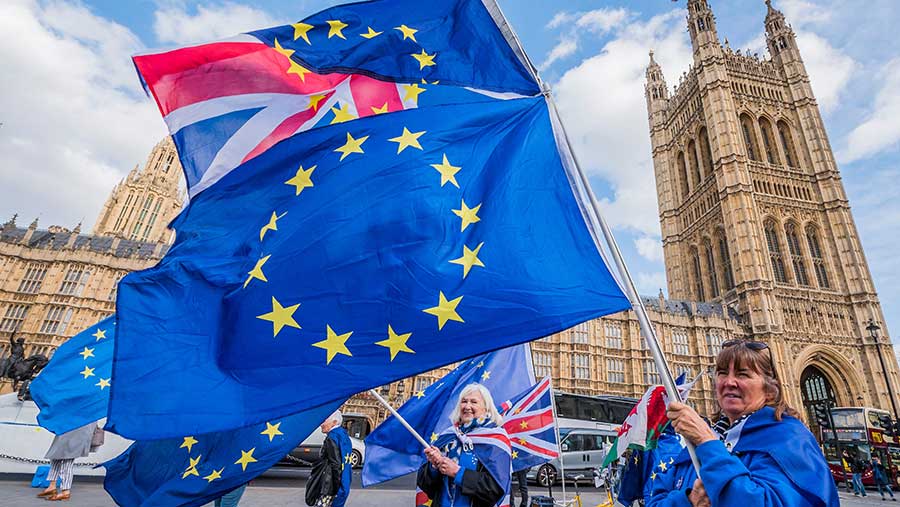 A no-deal Brexit would be “apocalyptic” for European dairy, according to a senior figure in the Irish dairy industry, delivering stark warnings over the future of the sector.

Dairy Industry Ireland (DII) director Conor Mulvihill offered a frank and direct assessment of the Brexit situation, singling out the UK government and its departments for particular criticism over their handling of the negotiations.

Mr Mulvihill said he felt compelled to speak out over the issue as he had become frustrated by what he saw as a wall of silence from within the UK over critical issues, during the INTL FCStone EU Dairy Outlook conference in Dublin.

Here are nine of the key points Mr Mulvihill made:

1. UK trade associations are being forced to back Brexit

Trade associations representing UK agriculture, food and drink have approached DII to ask it to bring to light particular issues, as they themselves are being prevented from criticising Brexit.

“UK trade associations know [Brexit] is a mess from a business perspective,” he said.

“They have been told from the highest levels of British government if you come and undermine Brexit, you are going to be cut out.”

Mr Mulvihill told Farmers Weekly that trade associations were being threatened with a loss of influence or access if they publicly expressed negative Brexit opinions.

Senior figures at the Department for International Trade thought the UK would be able to adopt existing EU free-trade agreements.

“I’ve been into the Department of Trade and had a conversation with someone very, very senior and it dawned on me half way through the conversation that they did not know that they were going to lose the 53 existing free-trade agreements that the EU have.”

Mr Mulvihill alleges that the senior figure thought the UK would just transpose the existing EU deals with the like of India, the United States, Japan and South Korea.

“I found that really scary when I saw officials who were supposed to be specialists that didn’t know that,” he added.

3. Nothing is happening in Whitehall

There is virtually no Brexit planning going on in Whitehall when he goes to visit in his capacity as director of DII, according to Mr Mulvihill.

“There is a Tory party internal war that is taking up all political headspace,” he says.

“I don’t see any planning. I see a couple of papers on a no-deal Brexit. We’ve seen a white paper which is welcome but goes nowhere near giving businesses clarity as to what to do.”

Mr Mulvihill said the EU faced a situation where the UK, the world’s largest importer of cheese, could be off the coast of mainland Europe with no deal in place in just six months.

“From a business or a political perspective, we are in a new era,” he said.

4. The UK is way behind on regulatory divergence

With just six months before the UK is scheduled to leave the EU, Mr Mulvihill says work on regulatory divergence, essential for UK products to enter the EU post-Brexit, did not exist and planning was only just starting now.

“There is no plan. There is a lot of saying, ‘We will do our own labelling, we will do our own nutrition,’ but since Brexit has been announced there has been 700 new EU laws affecting agri-food that need to be transposed in UK law.

“The ‘lift-and-shift’ solution put forward by the UK has been made redundant already,” he said.

Mr Mulvihill added that there was no body able to monitor or resolve UK/EU trade disputes either.

5. FTA is the UK’s best-case scenario

The best result for the UK would be a free-trade agreement with the EU, he said. However Mr Mulvihill pointed out that sellers who had tried to export cheese to Canada under the Comprehensive Economic and Trade Agreement (a free-trade agreement between Canada and the European Union) or products to South Korea would know that this sort of deal is not the same as access to the single market.

He added that the current from powerful elements in UK politics, suggesting that a no-deal outcome for the UK dairy industry would be a good thing, would lead to untold damage to both the UK, Ireland and the EU.

“From a trading and derivatives perspective a no deal is not a good outcome – the damage this potentially has to all of our industry is astronomical.”

6. New Zealand, Australia and the US are queuing to take up EU slack

Cheddar and butter tariffs under a World Trade Organisation (WTO) deal would wipe out the competitiveness of Irish and EU dairy exports into the UK.

“The cost to Irish cheesemakers would equate to an extra 21.5c/litre (22p/litre). Best of luck fobbing a 50% price rise on the British consumer,” said Mr Mulvihill.

He added that higher tariffs would lead to a 90% reduction in French and Irish cheese exports into the UK.

“The British government will be looking to their friends the Kiwis and will have to do a damned bad [free trade] deal [for the UK] to make sure there are no price increases.

“I assure you, from being in Whitehall myself, people from New Zealand, Australia and the States are already buzzing around waiting to take on that slack.”

7. Lack of Brexit dialogue in the UK is baffling

Mr Mulvihill said he was in disbelief after listening to Michael Gove’s speech to 2,000 British dairy farmers at the NFU convention in Birmingham in March.

“Michael Gove delivered an absolutely fantastic speech to these farmers and he got a huge ovation,” he said.

“In March it was just 350 days until Brexit. What was Michael Gove’s main topic within that? Fly tipping in the English countryside.

“He mentioned Brexit just once or twice in passing to 2,000 dairy farmers who don’t know where their product is going to go or what trading arrangements they’re going to get.”

Mr Mulvihill said he found the whole situation “crazy” and ended up dropping his speech on Irish dairy’s work to combat climate change, instead attempting to pick apart what Brexit might mean – which he admits “went down like a lead balloon”.

8. Russia ban will look like a picnic compared with Brexit

It is important to remember the lessons learnt from the export ban to Russia implemented in August 2014.

“No one figured on displacement of trade. The Finns, the Poles and the Irish couldn’t export to Russia and all the trade bounced back to the single market.”

Mr Mulvihill said the ban resulted in a drop in Irish exports of 30%, despite just 1.5% of dairy shipments actually going direct to Russia.

“If that scenario comes out again, I assure you a hard Brexit will make Russia look like a picnic,” he said.

The Irish dairy board director said the perspectives for Ireland and Britain varied substantially from what dairy industry insiders thought on the continent.

“I seem to be one of the few voices [in the EU dairy association] who is even bringing up Brexit.

“The attitude from the rest of Europe is: Bad decision. Sorry you’re leaving but don’t let the door hit you on the way out.”

He added: “The rest of Europe has moved on. They don’t want to talk about [Brexit].”