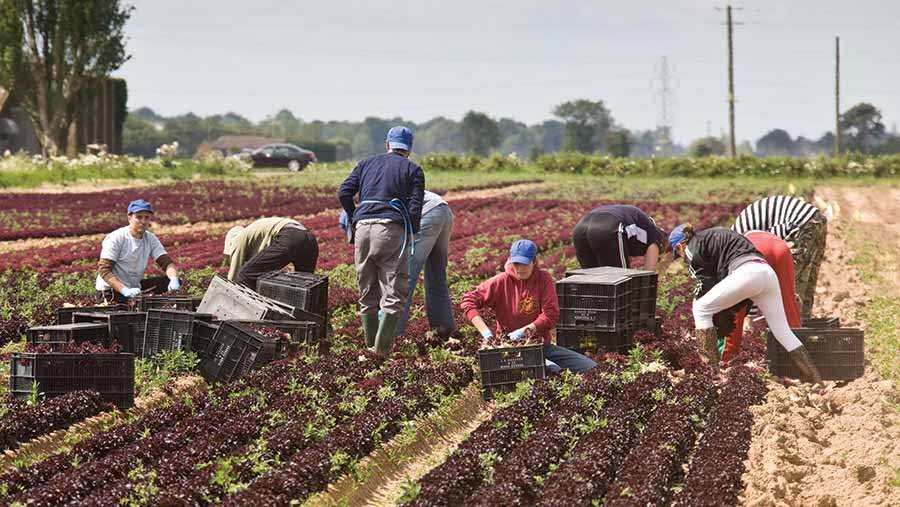 Migrant labour plays a key role in agriculture – but could farmers, especially in the horticulture sector, access enough labour if the UK voted to leave the EU?

Under the now-closed Seasonal Agricultural Workers Scheme (SAWS), more than 22,000 people from Bulgaria and Romania were allowed in to work temporarily on farms.

But when all restrictions were lifted in 2012, that labour force was able to move off farm into other sectors, causing a shortage in agriculture.

Some 29% of growers experienced problems recruiting enough labour in 2015, according to an NFU survey, and some 66% expect reductions in labour availability by 2018, with 43% anticipating labour shortages.

Allowing more migrants into the UK is going to be a political hot potato, though. Whether right wing or left wing, a significant proportion of the UK population is concerned about the issue, with a recent YouGov survey for ITV finding that 71% think immigration has been too high over the past decade.

For farmers too, it is a big reason for getting out of the EU. In a Farmers Weekly survey about 20% of respondents who said they would vote “leave” in the upcoming referendum said immigration was the main factor influencing their decision.

Find out how reliant we are currently on labour from oversees, where we could source labour if the UK voted out in the EU referendum and read the views of two growers in the fruit and veg industry.

How reliant are we on migrant labour?

As a sector, farming has a large interest in what happens to the UK’s access to migrant labour. Across all industries, EU-born workers account for just 5% of the country’s workforce, but in agriculture it’s 65%, according to Office for National Statistics (ONS) figures – not including seasonal workers.

It’s not just the labour-intensive horticulture sector that is reliant on migrant workers.

Pig and poultry units often employ migrant labour and a survey of dairy farmers, by the Royal Association of British Dairy Farmers two years ago, found that a third had employed migrant staff – with over half from Poland.

The key benefit of migrant labour as opposed to domestic labour is that it is generally more flexible, temporary and mobile.

This is something that is key for seasonal work, according to Heather Rolfe, of the National Institute of Economic and Social Research (NIESR).

British workers generally want permanent jobs, while many migrants are willing to come for just a few months.

The EU’s newer members, on the other hand – such as Poland, Lithuania, Bulgaria and Romania – have provided a large number of workers willing to do temporary seasonal work. The ease of movement within the EU and the relative proximity of labour has been a key driver.

However, as migrants have become more skilled and have improved their English, they have tended to move out of the sector into more highly skilled jobs, says Dr Rolfe, although many have also become key staff in management positions in farming businesses.

Even before the EU referendum was announced, the government’s Migration Advisory Committee had started to look towards Turkey and Russia to provide temporary workers.

Farming will need migrant labour. It will need as much as it can get from the EU and will also need to look elsewhere – whether the UK remains a member or not.

What is politically palatable will be a big factor, but what is practical will largely depend on the types of trade agreements the UK could agree if it came out.

Many in farming argue that the reintroduction of SAWS is needed, regardless of whether the UK remains in the EU or not.

This has the benefit of not being dependent on either outcome on 23 June, or on any particular trade deal. It could also be opened to workers in and outside the EU.

Ukip agricultural spokesman Stuart Agnew argues that, in the event of a Brexit, such a scheme could include the need for farmers to make sure workers returned home overseas when their employment ended.

How easy this would be to manage is unclear, but there is also no guarantee that the government would reintroduce such a scheme, especially given that David Cameron has pledged to cut immigration by “tens of thousands”.

However, a seasonal scheme may be more politically palatable than other types of labour access since it would be for temporary workers, says Catherine Barnard, professor of EU law and labour at the University of Cambridge.

This does not solve the problem of the need for permanent migrant labour in the sector, though.

These workers would probably be subject to visa restrictions if the UK was outside the EU and no longer signed up to the free movement of people, says Prof Barnard.

This type of arrangement is one that Norway and a number of other countries have with the EU.

It gives access to the single market and includes the free movement of people – something that the EU would be very unlikely to allow the UK to opt out of under this arrangement, says Prof Barnard.

It would give the UK access to EU labour in exactly the same way it does now – something that might be politically difficult, given the importance to “out” voters of cutting immigration.

Switzerland has this type of arrangement with the EU, which is similar to the EEA deal and includes the free movement of people. As with the EEA agreement, the UK would have access to EU labour as it does now, which might be politically challenging.

However, the EU would be unlikely to want to go down this route, as it is complicated and involves numerous bilateral agreements, says Prof Barnard. 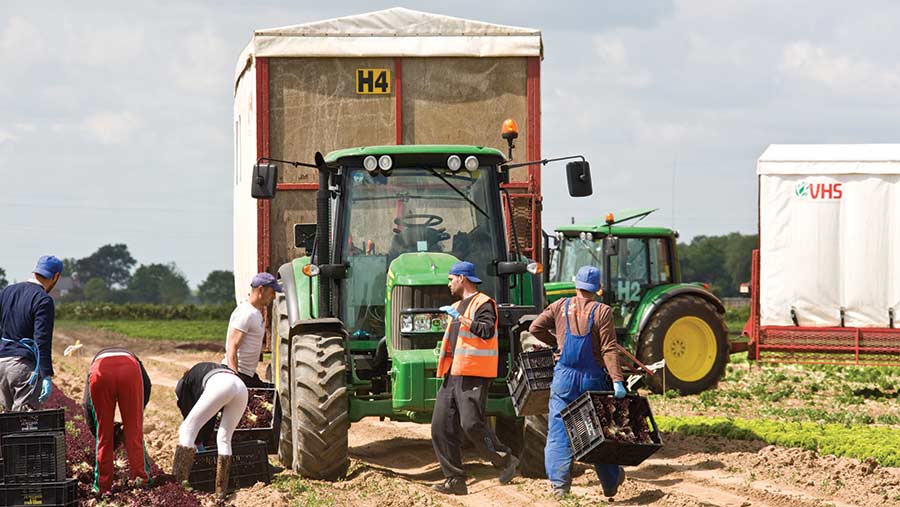 This is seen by some as a more likely option for future trade arrangements should the UK vote to leave the EU.

All workers entering the UK would be subject to domestic law, which would mean they would have to apply for visas. This would allow the government to restrict immigration more – something that would appeal to “out” voters – but which could have big consequences for farming businesses.

Visa requirements might be relaxed, however, for seasonal workers, says Prof Barnard, but there would be no guarantee of this.

The right of permanent staff to remain in the UK would be protected under “vested rights” and human rights laws, says Prof Barnard. But people would lose these rights if they left the country and would probably have to apply for a visa if they wanted to return.

All workers entering the UK would be subject to domestic law, which would mean they would have to apply for visas. This would allow the government to restrict immigration more – something that would appeal to “out” voters – but which could have big consequences for farming businesses.

Visa requirements might be relaxed, however, for seasonal workers, says Prof Barnard, but there is would be no guarantee of this.

The right of permanent staff to remain in the UK would be protected under “vested rights” and human rights laws, says Prof Barnard. But people would lose these rights if they left the country and would probably have to apply for a visa if they wanted to return. 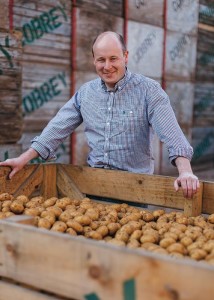 He employs hundreds of casual workers from eastern Europe.

Owned and run by the Chinn family, the business includes horticulture, potatoes and combinable crops.

The busiest period is April to June, when up to 2,000 casual workers harvest, grade and pack asparagus, blueberries and rhubarb.

Mr Chinn says he hasn’t yet made up his mind on how to vote on the UK’s future relationship with Europe.

“I am increasingly sitting on the fence as the referendum gets nearer. I didn’t think I would be – but I’m not sure we are better off in or out.”

Many of his workers used to come from Poland.

But the Polish economy improved after the country joined the EU and workers moved into other sectors. Today, almost all casual workers employed by Cobrey Farms come from Bulgaria and Romania.

Leaving the EU would cause short-term uncertainty, says Mr Chinn. But a looming labour shortage will have to be addressed, whether or not the UK remains a member of the trading bloc. “The seasonal aspect of the work makes it difficult to find enough people.”

Mr Chinn adds: “I am surprised at the percentage of farmers who are enthusiastic about leaving, because in the long term I just can’t see the government supporting UK agriculture to the same extent it is supported at the moment by Brussels.” 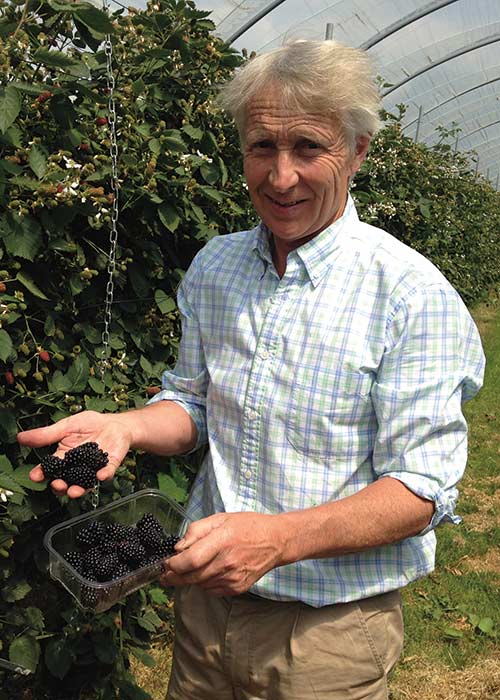 Kent grower Robert Pascall says he has no immediate concerns about the likely impact on his farm’s labour force if the UK leaves the EU.

Mr Pascall, of Clock House Farm, Coxheath, near Maidstone, employs some 650 seasonal workers at peak times in June, many of them from overseas.

“We survived before we had access to the whole of Europe,” says Mr Pascall.

“The Seasonal Agricultural Workers Scheme (SAWS) was better than the current set-up, because people knew exactly what they were coming for, and you knew exactly how many people you were getting as an employer.”

Mr Pascall says it is not a given that the government will reintroduce SAWS – but is it a given that borders will be closed if the UK leaves the EU. “There are a lot of unknowns, so it is very difficult to be categorical, but personally I don’t have a huge amount of concern,” he says.

“We pay way above the odds compared with European wages so a lot of people want to come and work here for that reason. If you look at the rest of Europe, the minimum wage is substantially lower there than it is here.”

Similarly, demand for good fruit remains strong. “We are producing something that the general public want. Our consumers aren’t going to leave Britain and a huge number of them want to eat fruit – particularly home-grown fruit – and we have a provenance they can trust.”

The ‘Ask the…’ interactive Q&A series has a brand new topic. Experts at Rosconn Strategic Land have come together to answer your queries on selling land. They will help you navigate the process so you can make informed decisions about the future of your land and your business. Join us for Ask the…Land Promoter series.
Register now
See more
Share this