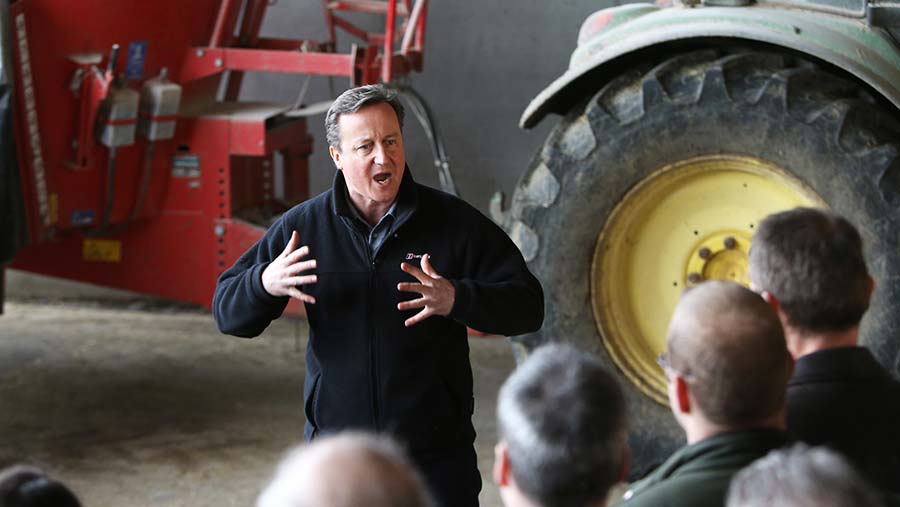 Prime minister David Cameron has confirmed his government would continue to offer financial support to farmers if the UK votes to leave the EU in the forthcoming referendum.

In a letter sent to landowners’ group the CLA, Mr Cameron said: “As long as I am prime minister, I would make sure that an agricultural support system would be properly maintained. (Read a PDF of the PM’s letter).

But Mr Cameron warned: “However, I can obviously not make the same guarantees for future governments.

“It is unclear, for example, where some of my opponents, including Jeremy Corbyn, stand on the issue.

“We should remember that previous Labour governments have been in favour of either reducing key agricultural subsidies or abolishing them altogether.”

Mr Cameron was responding to a request from the CLA to set out the government’s position on UK farm subsidy support if the country were to vote to leave the EU in the referendum on 23 June.

Defra has come in for strong criticism from farmers for openly admitting it has “No Plan B” for farming in the event of a Brexit. In his letter, Mr Cameron also does not detail any measures his government would introduce to support farmers if the UK left the EU.

Brexit is ‘leap in the dark’

In the letter, Mr Cameron warns farmers that leaving the EU “would be a leap in the dark”.

The prime minister warned that a UK exit from the EU “would call into serious question jobs and investment in the rural economy”.

He said: “Only today, the International Monetary Fund warned that Britain leaving the EU would pose major risks for our economy.

“Respected organisations like the London School of Economics have in recent weeks shown that being outside the EU would reduce the size of the UK economy and seriously hit economic growth.

“This would inevitably mean less public money spend and any future government would have to make its own decisions on what level of farm support it could afford.”

Mr Cameron said staying in the EU would guarantee farmers could continue to sell their products without quotas and tariffs to a market of 500 million people.

But if the UK left the EU, continued access to the market would be a matter for the remaining 27 member states to decide.

Mr Cameron said: “We know that no existing alternative to EU membership – whether Norway, Switzerland, Canada, or WTO – offers full access to the EU single market for farmers. All involve tariffs and additional costs.”

He added: “For example, if we adopted a Canada-style deal, British beef exports would face a 12% tariff if they exceeded a certain volume.

“We still do not sell any beef to America – because of restrictions that are nearly 20 years old. Our farmers would also face years of uncertainty as we negotiated a new arrangement with the EU.”

Mr Cameron acknowledged that the UK must work closer with the EU to cut red tape for farmers. Finally, he concluded that UK farmers and the countryside would be “stronger, safer and better off inside a reformed European Union”.

Responding to letter, CLA president Ross Murray said: “The prime minister is a clear and passionate advocate of the case for remain.

“He is making the case that farmers that want greater certainty can play their part by voting for remain in the referendum.

“We respect his arguments and many farmers will agree with him… It is a significant reassurance about how seriously he takes the implications of this decision for rural people and the rural economy.

But he added: “What he has not done is provide the reassurance we asked for in our letter that government has a plan for how it will manage all outcomes of the referendum.”

The CLA, which will remain neutral on the question of whether the UK should stay or leave the EU, published a report last month Leave or Remain: The Decisions That Politicians Must Make to Support the Rural Economy, which sets out the four priority areas for farming and rural businesses concerning the EU referendum.