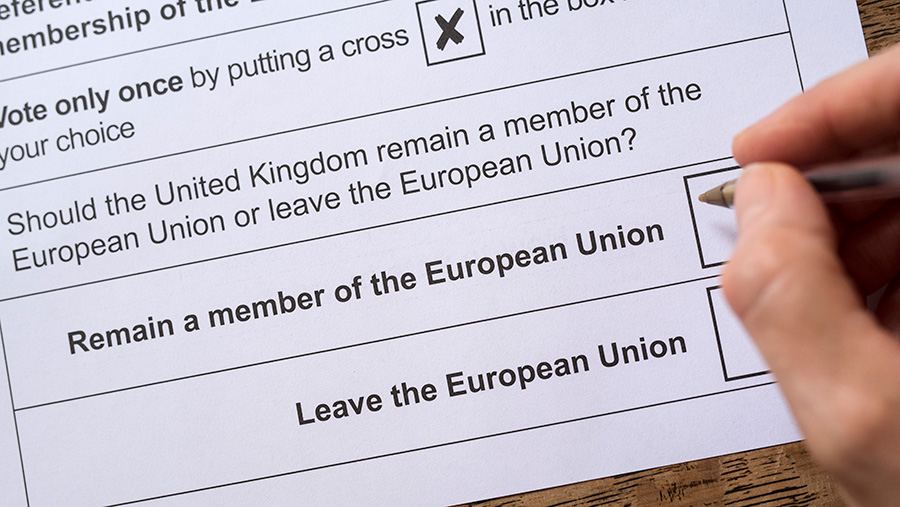 More than one in four farmers are yet to decide how they will vote in the EU referendum on 23 June, an industry survey has revealed.

Published to coincide with an EU referendum debate at this week’s Cereals event, the survey suggests everything is to play for ahead just days before what has been described as the biggest decision facing British farmers since the UK joined the Common Market in 1973.

A narrow majority of 38% of farmers believe remaining in the UK is right for British agriculture compared with 34% who think the industry will be better off leaving, says the survey.

But 28% of farmers still don’t know which way they will vote.

The poll comes as David Cameron took to the campaign trail to warn that leaving the EU posed a “massive threat” to British agriculture.

The prime minister made the comments as he visited farmers in North Yorkshire.

The survey was carried out by the National Farm Research Unit on behalf of Map of Agriculture, an agricultural data company.

It involved 2,337 farmers with nationwide votes extrapolated to 142,280 farm businesses and corrected by farm size and type.

When asked why they were voting out, farmers in favour of Brexit expressed frustration with the EU.

One grower, with 100ha (250 acres) in Essex, said the UK was being “inhibited by EU rules and regulations and should be more independent”.

But farmers in favour of remaining said leaving would mean increased uncertainty regarding agricultural trade and subsidy support.

“For every pound we put in, agriculture receives five back – it is purely economic,” said one survey respondent.

Brexit campaigners – including Defra minister George Eustice – have pledged that farm subsidies will be maintained at least at current levels until 2020 if the UK leaves the EU.

But that promise was called into question during a Brexit debate on the first day of Cereals.

More than 400 people crammed into the conference centre at the event.

Former NFU president Peter Kendall, who believes the UK is stronger in Europe, told the audience: “These people are saying whatever they can to get you to vote ‘out’ next week.”

The issue of trade was also debated. Hertfordshire farmer Andrew Watts said he feared agricultural interests would be sacrificed by a government seeking to secure trade deals for other industry sectors if the UK votes for Brexit.

But Conservative MEP and “leave” campaigner David Campbell-Bannerman said: “I don’t think it will be sacrificed at all.