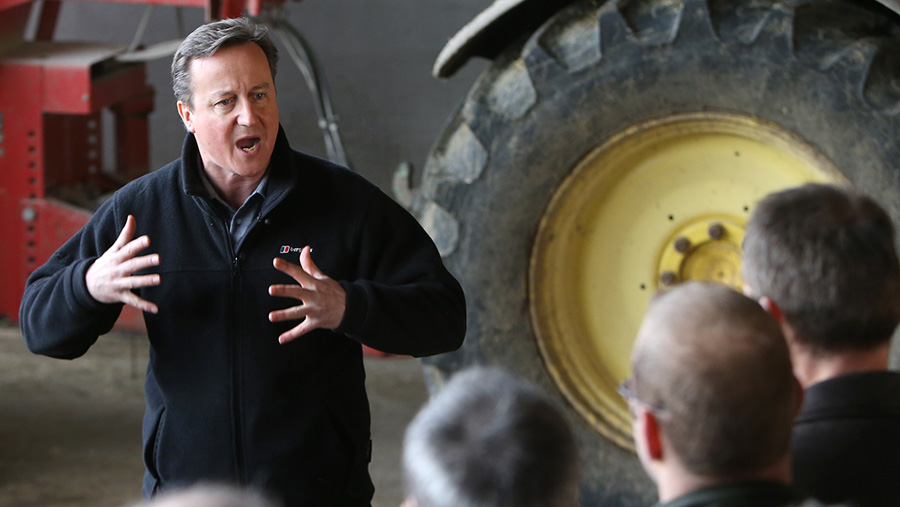 Livestock farmers would be forced to pay an extra £330m a year to export their goods abroad in the event of an exit from the EU, the prime minister has claimed.

David Cameron ramped up his efforts to persuade people to vote to stay in the EU by warning farmers they would “suffer enormously” from an exit.

He visited a farm in north Wales on Friday (11 March) as part of his tour around the country to convince eurosceptics to vote “In” on 23 June.

Mr Cameron said more than 90% of UK lamb and beef exports – worth about £605m in total value – were traded in the EU.

The farming sector contributes £9.9bn to the UK economy and employs almost half a million people.

But he warned that leaving the single market and relying on World Trade Organisation rules would result in extra costs of exporting British beef of £240m/year.

An extra £90m would also be added to the cost of British beef exports, the prime minister claimed.

“It gives them access to 500 million consumers, to whom they can sell their goods on an open, unrestricted basis.

“No tariffs, no barriers, no bogus health and safety rules designed to keep our products out.”

He said: “It’s important to be clear here on a few things.

The French export £650m of wine to the UK and they import £170m of lamb from the UK each year.

“Who is going to rock the boat on that deal?

“Staying in the EU means we are subject to Mercosur countries ultimately, where beef is likely to be the sacrificial lamb. UK and Irish beef will be desperately hit.

“Suckler beef will really be a museum beef it Mercosur comes to fruition.”

Eurosceptic former Defra secretary Owen Paterson has told farmers they would be better off outside the EU.

Mr Paterson said a UK government outside the EU would save money and be able to allocate more generous farm payments than under the common agricultural policy (CAP).

“Agriculture and food production is hampered by our membership of the common agricultural policy”
Owen Paterson, former Defra minister

“I believe that the United Kingdom has a great future beyond the political arrangements of the European Union,” Mr Paterson told the Oxford Farming Conference in January.

“Agriculture and food production is hampered by our membership of the common agricultural policy.

“CAP negotiations between 28 countries inevitably mean that we have to accept compromises, these are at best deeply unsatisfactory and at worst actively damaging to UK farmers.”

Outside the EU, the UK would be able to develop its own bilateral trade agreements, increase farm output and work with like-minded countries to combat plant disease and animal disease, Mr Paterson added.

Farm minister George Eustice has also come out in favour of an EU exit, putting him at odds with Defra secretary Liz Truss who is calling on the UK to stay in Europe.

Mr Eustice said there would be an £18bn/year “Brexit dividend” in savings if the UK left the EU.

He added: “Could we find the money to spend £2bn on farming and the environment? Of course we could. Would we? Without the shadow of a doubt.”