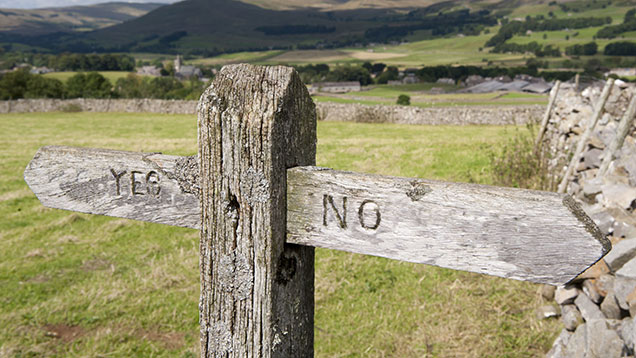 While many people have an instinctive response to the question of European membership, right now it is impossible to measure the true effect of being outside the EU.

The NFU has not taken a Yes or No stance on Europe ahead of the conclusion of the UK’s renegotiation of its relationship with Europe.

Even though a referendum could take place as early as spring next year, so far no one has explained what the nature of the UK’s relationship with the EU would be if we were to leave.

Neither do we know the conditions under which farmers would be expected to operate.

A number of trade models with Europe already exist – such as the European Free Trade Agreement and European Economic Area – but none covers agriculture.

In the middle of so many unknowns, the NFU’s team of economic and international affairs experts has explored British agriculture’s current relationship with the EU and the big issues that need answers.

The union’s new report, UK Farming’s Relationship with the EU, is not designed to answer all the questions, but as the debate evolves in the run-up to the referendum, the NFU will push politicians to answer those that are vital to our industry.

When you think about agriculture’s relationship with Europe, your mind may jump to the CAP. But being part of the EU goes far beyond its reach.

Key questions facing farming if the UK voted No in the EU referendum:

Key questions facing farming if the UK voted Yes in the EU referendum:

The full report – EU referendum: UK farming’s relationship with the EU – is available in PDF format on the NFU website at www.nfuonline.com

The EU single market allows people and businesses to move and trade freely across borders within the EU.

For British farmers, having access to the single market means access to the world’s largest economy with more than 500 million people and a GDP of €25,000 (£18,000) a head.

If the UK leaves the EU, would we still have access to this crucial trading platform? If so, how will the British government ensure fair competition for UK farmers?

It is worth taking a look at just how much of an effect the EU single market has on farm businesses today. The EU is the world’s largest agricultural trader.

Conversely, the UK is a net importer of agrifood products, totalling £39bn in 2014.

In fact, the UK imports nearly twice as many agrifood products from EU countries than it exports.

Meanwhile, British farming exports are significant. In 2014 we exported £12.8bn worth of produce, approximately three-quarters of which was destined for the EU.

For some sectors the EU market is critical. For example, 38% of all lamb produced in the UK goes to Europe. France alone purchased more than £200m worth of UK lamb last year.

As well as facilitating the free movement of goods around the single market, the EU is a customs union, which means goods entering the EU are subject to the Common Customs Tariff.

The tariff is common to all EU members, but the rates of duty differ from product to product, depending on what they are and where they have come from.

This leaves us with some important but as yet unanswered questions.

If we left the EU, would British exporters face the EU’s tariffs or could the government negotiate special access?

Would the UK government apply tariffs to imports to this country?

Would the UK take a similar approach to protect domestic production?

There’s a lot at stake for farm businesses. The government must explain how British farming will fit with the single market if we leave the EU.

The export market and customs tariff are at the heart of this issue.

The UK’s financial contribution to the EU budget is another area that often comes into focus when considering the country’s relationship with the EU.

The EU budget itself is a fraction of national government expenditure (less than 2.25% of EU member states’ total public expenditure), but, at more than €1tr (£735bn) for the period 2014-20, that is still a lot of cash.

The Treasury benefits from the UK rebate, negotiated by Margaret Thatcher back in 1984, to the tune of £4.88bn and UK farming also receives £3.08bn in CAP direct payments.

The cost of EU membership is definitely an issue that commentators will be drawn to throughout the debate.

The EU is not alone in providing support for its farmers. The Organisation for Economic Co-operation and Development monitors support levels round the world.

Switzerland and Norway are often cited as examples the UK could follow if we left the EU.

These countries are not part of the EU’s CAP, but have their own versions that offer significantly higher levels of support than the EU.

In fact, they have the highest ratio of support for their farmers in the world.

What would a British version of the CAP look like? How could fairness for UK farmers be guaranteed?

The NFU has investigated farming’s relationship with Europe on a number of fronts, including trade, CAP, R&D, labour availability and the reach of EU legislation.

We have also highlighted what we hope David Cameron will achieve from his renegotiations.

The NFU will continue to promote the interests of British farmers throughout the debate and we are encouraging everyone to get involved and press for clarity amid the uncertainty that lies ahead.