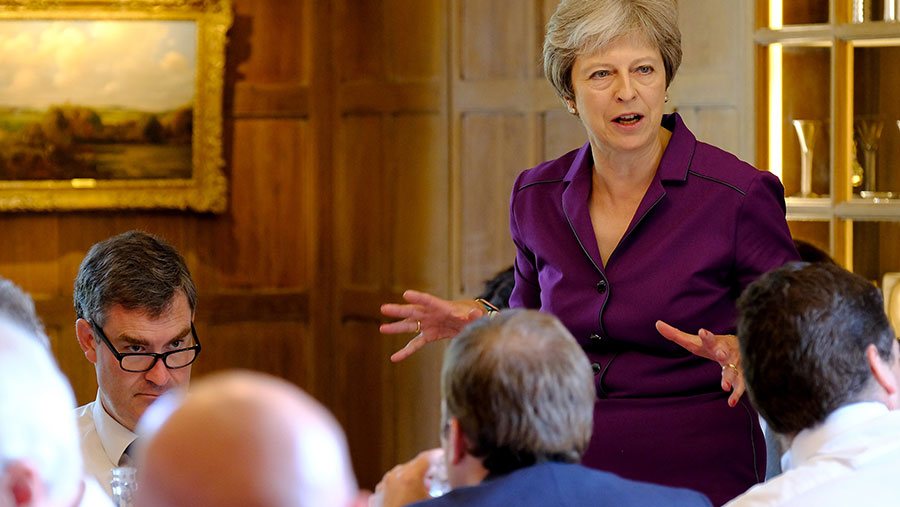 Agreement among cabinet ministers for a new free-trade area for goods with the EU marks a “significant breakthrough” towards ensuring unfettered access for UK food and agricultural commodities post Brexit, say farm leaders.

The agreement, reached at Chequers on Friday (6 July), states that the UK and EU would “maintain a common rulebook for all goods, including agri-food” and would “commit by treaty to ongoing harmonisation with EU rules on goods”.

This would “ensure that the UK and EU have frictionless access to each other’s markets… protecting the uniquely integrated supply chains and ‘just-in-time’ processes that have developed over the last 40 years”.

The UK would also be able to negotiate its own trade deals and set its own tariffs with the rest of the world, while collecting different tariffs on behalf of the EU for goods coming into the UK but destined for the EU.

Such a “Facilitated Customs Arrangement” would remove the need for customs checks and controls, so maintaining an open border between Northern Ireland and the Republic of Ireland, says the paper.

What the Chequers statement suggests

NFU president Minette Batters said more detail was needed, but avoiding friction at the border was vital in order to maintain the high levels of trade in agricultural goods with our largest market, which is so important to the farm economy.

“The NFU has argued strongly since the EU referendum that maintaining as free and frictionless trade as possible between the EU and the UK post-Brexit will be critical if British farmers are to continue to play their part in providing high quality and affordable food to the British public.”

Country Land and Business Association (CLA) president Tim Breitmeyer described the development as “an important breakthrough in delivering a clear vision for a post-Brexit UK”.

“A future relationship which imposes barriers to trade or excludes agri-food would not just put at risk farming businesses, but have a devastating impact across the wider rural economy,” he said.

Mr Breitmeyer said the statement would give farmers and rural businesses more confidence about the future, but noted that the government’s vision still has to be negotiated and agreed with the EU.

“The proposed Facilitated Customs Arrangement and EU-UK Free Trade Area, under which the UK would control its own tariffs and trade with the rest of the world, will not work for agriculture and food,” said IFA president Joe Healy.

“It would allow the UK to open the floodgates to cheap food imports, for example Brazilian beef, that would not only destroy the UK market for Irish farmers, but would also wreak havoc across the entire EU market.”

Mr Healy reiterated the IFA’s demand for “no border on the island of Ireland, no border in the Irish Sea and no scope for the UK to pursue a cheap food policy”.

“That means that the UK must apply the EU’s common external tariff and tariff rate quotas, which limit the import volumes of agricultural and food products.”

As well as commenting on trade, the government has promised to “maintain high regulatory standards for the environment, climate change, social and employment, and consumer protection – meaning we would not let standards fall below their current levels”.

Green umbrella group Sustain said it remains concerned about the detail and practicalities, “not least the UK’s relationship with European institutions (such as the European Food Safety Authority), important to maintaining high food standards”.

“It is not yet clear how the UK government hopes to solve the conundrum of meeting EU food standards whilst also seeking trade deals with countries such as the US, whose food standards differ so much from our own.”