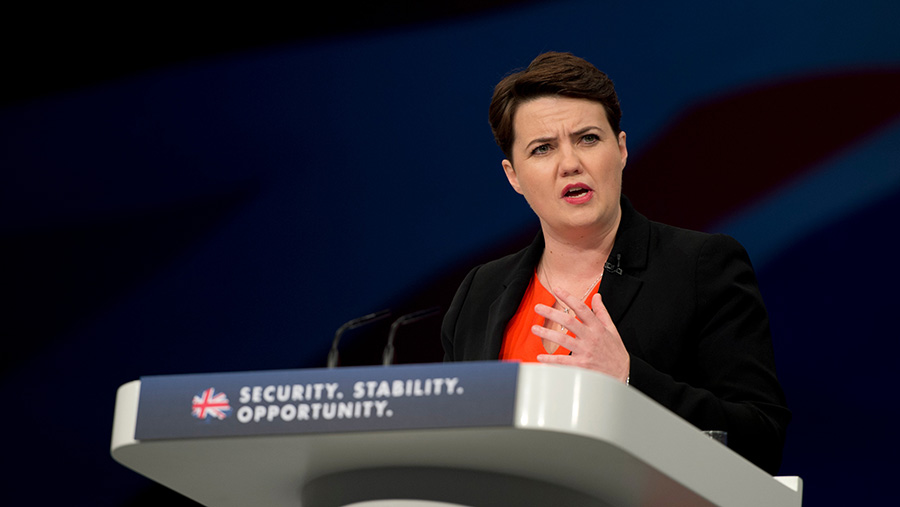 Scottish Conservative leader Ruth Davidson has attacked SNP calls for Westminster to devolve more powers to Holyrood to devise its own farming policy after Brexit.

Ms Davidson said creating a separate Scottish agricultural policy after the UK leaves the EU would be “foolhardy” and it would place barriers within our own UK domestic market.

Speaking at the NFU Scotland annual general meeting on Monday (6 February), she told delegates there had been “much talk about where powers should lie when they come back from Europe”.

Ms Davidson predicted an “almighty political row” over the coming months about whether Holyrood or Westminster should decide Brexit farming policy. But a “pragmatic” approach would be required.

The ruling SNP administration argues that Westminster should repatriate more powers to Holyrood to allow Scotland to take decisions that best meet the interests of its farmers, crofters, landowners and tenants.

For example, 85% of Scottish farmland is classed as less favoured, compared to 15% in England. The SNP says it is vital that support for less favoured area farmers continues after Brexit. But the government has given no guarantees beyond 2019.

Ms Davidson is advocating a UK-wide funding approach after Brexit. She told the conference in Glasgow it would be unwise for Scotland to create domestic barriers and pursue a “so-called differentiated deal within the UK”, or “to leave the UK altogether”.

However, It was vital that the needs of Scottish farmers were heard in Brexit farming policy, she added.

Ms Davidson, a leading figure of the Remain campaign, said she did not see Brexit as a “binary choice” as increasingly, the UK appeared to be moving towards a system of shared power.

“The reality is that the UK is a highly integrated economic unit of which Scotland is a part and upon which our prosperity depends… and where fully 85% of Scotland’s agri-exports go,” she added.

Ms Davidson acknowledged that Brexit would be a period of “great change” and uncertainty, but it offers a “genuine opportunity to reset the framework for the better”.

“It is surely possible to design a better support system than one which has to accommodate the needs of farmers on the shores of the Mediterranean with those on the fringes of the Arctic circle,” she said.

The Treasury has promised that UK agriculture will get the same level of funding until at least 2020. After that, the timetable for farm support is uncertain.

The government’s Brexit White Paper, published last week, promised that “no decisions currently taken by the devolved administrations will be removed”.

But he warned that unless prime minister Theresa May secured a “decent free trade deal”, UK farmers would face tariffs and barriers.

Emeritus Professor Allan Buckwell argued that Theresa May’s preference for the UK to leave the single market and the customs union would lead to higher trading costs, in the form of customs controls, and tariffs on goods.

“The question of tariffs or not is the critical point,” said Prof Buckwell. “If we drop out of the single market and if we have not managed to negotiate a free trade agreement, which includes agriculture… then we face tariffs on our exports and imports.

“Scotland would face tariffs – potentially – on products such as red meat, particularly lamb, and whisky on your trade with Europe.”