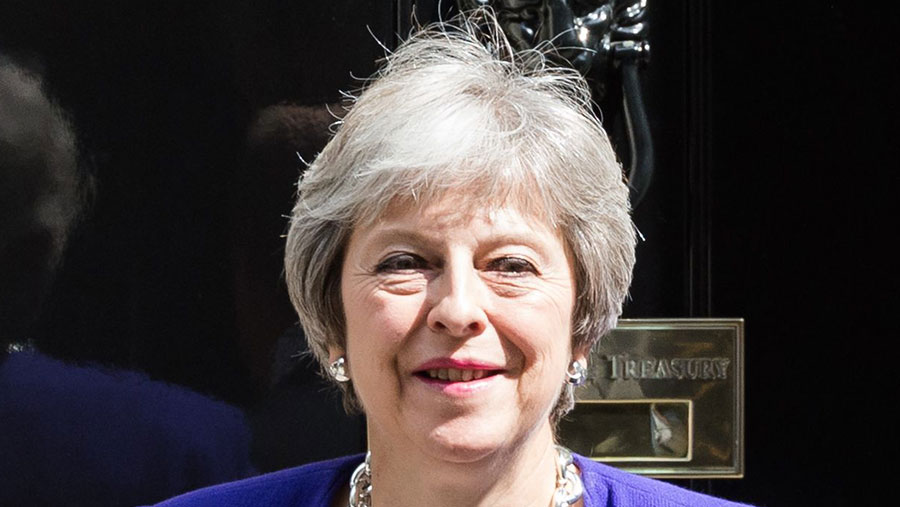 Farm leaders urged Theresa May to avoid a hard Brexit at all costs during talks at the Royal Welsh Show on Thursday (26 July).

The prime minister toured the Builth Wells showground and held round-table talks with farm union representatives to hear their views on the UK leaving the EU.

Speaking afterwards, Mrs May said: “One of the clear messages I’ve had is about the importance of being able to continue to trade well with Europe and trading around the rest of the world.”

See also: Analysis: What the Chequers agreement means for farmers

Mrs May her recent “Chequers deal” would deliver frictionless trade in agri-food and agri-products with the EU and the ability to do deals around the rest of the world too.

The Chequers proposals include a commitment to maintain a “common rulebook” with the EU for all goods – including agricultural products, after Brexit.

NFU Cymru president John Davies said he was encouraged by “practical and pragmatic approach” to Brexit outlined in the Chequers deal.

But he said it was also important that the UK government secured conditions enabling Welsh farmers to have a productive, profitable and progressive future.

That future needed to value food production as well as delivering for the environment, he said.

Mr Davies added: “I made it clear to the prime minister that now was the time for government to show leadership.

“They must not waiver or be deflected from the aim of delivering the best possible deal with the EU27 and other markets.”

The EU is yet to agree to the Chequers proposals.

Farmers Union of Wales president Glyn Roberts said an extension to the Article 50 period must be a priority if a hard Brexit started to become a real likelihood.

He said: “The consequences of a hard Brexit would be so extreme for our industries, including farming, and for the economy of the country as a whole it should not be allowed to happen.

More time to negotiate a common sense agreement with the EU would to be a priority if a hard Brexit became likely, said Mr Roberts

Losing access to the EU market would be particularly devastating for the Welsh farming industry, but would also cause huge damage to the UK economy, he added.

“It would be completely reckless to risk the cataclysmic damage of a hard Brexit in April 2019 rather than trying to get more time to reach a deal.”

Mr Roberts said the FUW had made it clear since the EU referendum Brexit should take place over a safe and realistic timescale.

“The thousands of businesses present today on the Royal Welsh showground are a microcosm of our rural economy which employs hundreds of thousands of people across Wales alone.

“A hard Brexit risks causing collapse on a monumental scale, and we must fight to stop that from happening,” said Mr Roberts.