Farmers Weekly readers were quick to put pen to paper after the historical Brexit vote on 23 June. 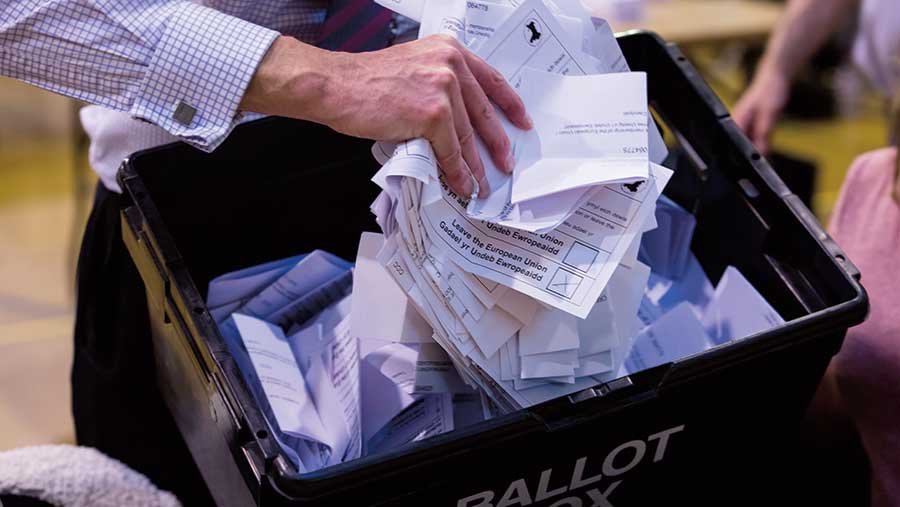 Some were delighted with the “leave” decision, suggesting it heralded a bright new future for UK agriculture.

Others were appalled, claiming the move would hit farmers and agriculture hard.

Here are a few of the letters we received in the days following the referendum.

Many surveys showed the farming community was, like the country, in favour of leaving the EU. Now is a time for calm reflection to assess the implications and the prospects ahead.

It is a time for farming organisations and government to work together to design the first principles of a new support scheme for our industry and address the practical issues such as migrant labour that need resolution.

For the moment – and for some time to come – nothing has changed. I am confident we have the time and expertise to address these issues.

It’s a new start for an industry with a great history and equally a great future.

Sutton on the Hill, Derbyshire

If you voted out for farming reasons, I would genuinely love to know your logic.

In the past two CAP negotiations, both Labour and the Conservatives called for direct payments to be phasd out. Defra cuts mean there are much fewer farming voices in Whitehall to make our case than there are in EU institutions.

We may sigh when our European colleagues seemingly ignore this or that rule, but their political voice has been powerful and they have been on our team.

Some say we want less red tape. An understandable sentiment, of course, but statutory management requirements aren’t going anywhere (the clue is in the name).

We all know commodity prices are bouncing around either side of production costs. Most farmers rely on their BPS to make ends meet, especially for those of us who are tenants. Yet by voting for it to be removed, we will still have most of the costs of EU membership, but none of the benefits.

We have exposed ourselves to domestic political pressures and competition for farm support. And despite warm words from Owen Paterson, who said “we could pay more than the CAP” (by the way, that’s the same Owen Paterson who called for no direct payments at the last round of CAP negotiations) in 10 years’ time it will be a hard case to make with NHS demands rising ever higher.

Indeed, there is already a campaign online for the much-quoted £350m/week to be ring-fenced for the NHS. We are going to have to make the case for farm support at every general election and it will be increasingly difficult.

And before you say it, New Zealand is not a comparable example to offer hope of a subsidy-free scenario. Different time, different legislation, different lobbyists, different markets.

No doubt such well-meaning sentiments as “we need to pull together now and make it work” will be spouted. As if we haven’t been trying our hardest to do just that for the past 20 years.

I haven’t even mentioned pillar 2 of the CAP, agri-environmental schemes and broader rural development.

So go on, if you voted out for farming reasons, please enlighten me as to why you thought that was a good idea. They say turkeys don’t vote for Christmas, but it seems they actually do.

In agricultural terms, the Biblical saying “you reap what you sow” has never been more apt following last week’s vote to leave the EU.

According to polls conducted by this newspaper, farmers overwhelmingly backed Brexit.

If accurate, a sense of optimism, albeit tinged with uncertainty about what happens next, should now be rolling across the countryside.

However, helping to pull the trigger for change is not enough. Farmers in this country have a poor reputation for co-operating, but working together will be vital if they are to get a good deal outside the EU.

No longer will we be able to rely on militant continental farmers to make the case for farming.

Politicians find it easy to make promises, but delivering on them often proves trickier.

Those who criticised their farming unions for wanting to remain in the EU will need their lobbying powers more than ever to hold politicians to account and make sure agriculture doesn’t fall between the cracks in the rush to renegotiate trade deals with Europe and the rest of the world.

In the run-up to the referendum, much was made of our ability to strike new trade deals outside the EU, but the opportunity for many countries with lower costs of production than ours will clearly be exporting more of its agricultural products to the UK than buying what we produce.

As well as working together, farmers also need to take a long, hard look at their own businesses to ensure they are robust enough to cope with the challenges of Brexit.

While the fall in the value of sterling offers a short-term boost, the inevitable reduction in direct payments and a likely shift towards a system based on the delivery of ecosystem services and environmental benefits will clearly have an effect on many businesses.

The status quo may no longer be an option and innovative and entrepreneurial solutions will need to be found. Those who plan ahead will be at an advantage in this brave new world.

Brexit will have far-reaching implications for us all and the challenges and opportunities for agriculture in particular will be even more significant.

We urgently need to plan to turn the situation to our advantage and a key strategy within this should be farmer co-operation and supply chain collaboration.

If farmers want to get a fair return on the time and money they invest and the risks they have to take, then now more than ever we need to have a high proportion of our inputs and outputs channelled through farmer-owned co-operative business structures.

We already have many good farmer co-operatives and we will need them to work together to not only protect and support their members, but also help them to develop their businesses to be able to be competitive and sustainable.

It’s not going to be easy, but if we can work together, we will have a much better chance of having a prosperous and sustainable agriculture in this country.

I voted remain, but we are out.

Something relatively small in the overall global scene that nobody is mentioning (yet) is, who is going to cover the massive redundancy costs to pay off all the UK MEPs?

During the decades of my minor political career as a councillor, I have written a handful of times to a number of this region’s MEPs about issues that concerned me and/or my constituents. Not one of them ever replied.

So, I for one will not miss them. However, I am concerned about what pay-offs they will now get from a public purse. In global terms it will be insignificant, but I can’t wait to see these MEPs in the queue at the Job Centre.

With a leave result secured, it is time for Defra secretary Liz Truss to stand down and accept responsibility for her actions, both for backing the wrong outcome and overseeing the mess the 2015 BSP has become.

In George Eustice we have a worthwhile successor as head of Defra to start from first principles.

With this move, a new agriculture secretary would be needed and a suitable candidate would be Rishi Sunak, MR for Richmond, who has worked hard for the farming community as an MP and as a member of the Efra committee. MPs like this deserve our support.

The reluctance of France and Germany to support the use of glyphosate indicates the ever-prevalent difficulties that continued membership of the EU would have brought. To put it simply, if any country objects, our farmers would have been helpless.

Strange that you can go down to any garden centre and buy glyphosate weed killer without a problem. Multiply this by tens of thousands of gardeners and this must be a lot of glyphosate. How can this make sense?