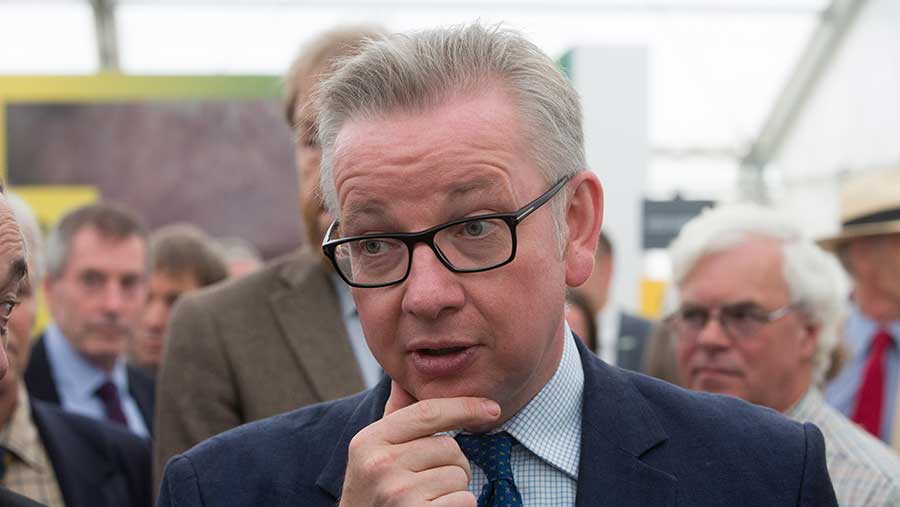 New Defra secretary Michael Gove has been accused of performing a U-turn over pledges that Brexit would present an opportunity to import cheaper food into the UK.

During the EU referendum campaign, Mr Gove promised British consumers they would benefit from cheaper food because of more imports from outside the EU.

In a previous interview with the Daily Mail, he suggested an independent Britain “could choose to strike free-trade agreements with emerging economies and lower tariffs”.

“He [Mr Gove] told voters that after Brexit there would be honey for tea, but now reality is starting to bite, he is offering British consumers nothing but thin gruel.”
Tim Farron

See also: What can farmers expect from Michael Gove?

This would extend new opportunities to developing nations, “allowing prices in Britain to become cheaper”.

However, Mr Gove appeared to contradict this commitment during an interview with press at the Three Counties Show in Malvern, Worcestershire, on Friday (16 June), where he made his first public appearance as the new Defra secretary.

He told reporters: “I have absolutely no intention of allowing any of the protections that are currently in place – which ensure that the consumer has high-quality food and that farmers are encouraged to invest in maintaining the very highest standards – to slip. There is no way that is going to be undermined.”

South Lakes MP and outgoing Lib Dem leader Tim Farron accused Mr Gove of telling “yet another lie” to go with the £350m/week he promised the NHS would receive after Brexit.

Mr Farron said: “He [Mr Gove] told voters that after Brexit there would be honey for tea, but now reality is starting to bite, he is offering British consumers nothing but thin gruel.”

Meanwhile, farmers were still waiting to find out if the Conservatives will honour their commitment to provide at least the same level of support currently receive from EU after Brexit.

So far the Conservatives have only committed to continue current levels of agricultural support up to 2022.

Speaking at the Three Counties Show, Mr Gove said: “As we leave the European Union, there is an opportunity for us to look at the way subsidy is allocated in order to see if we can make it more efficient and more effective.

“The first thing we need to do is listen to those at the sharp end and learn from them how we can improve the current allocations and delivery of support.”