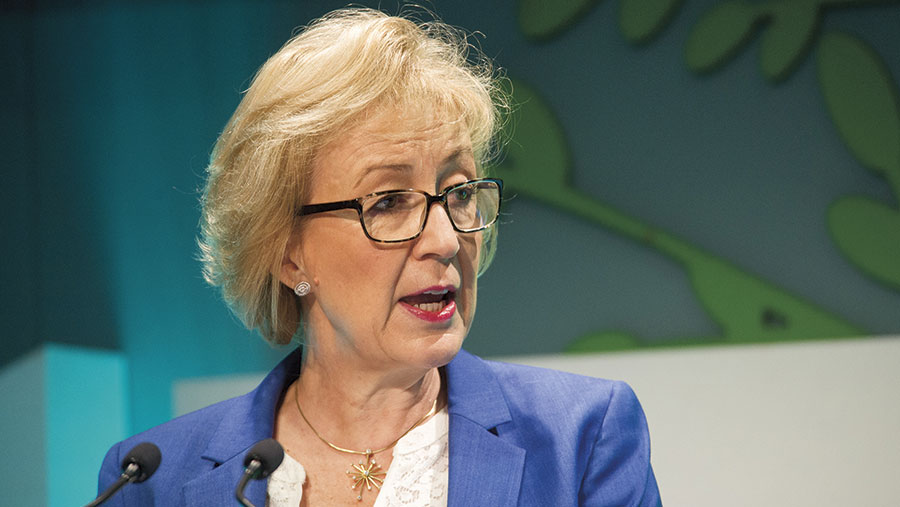 Her keynote speech to the Oxford Farming Conference reveals that Defra secretary Andrea Leadsom is a long way from devising a post-Brexit policy for agriculture.

Johann Tasker takes a closer look at the reality behind the soundbites.

“For an industry that’s been around as long as mankind itself, farming has been at the centre of human achievement”

Defra billed this speech as Mrs Leadsom setting out her vision for agriculture. It opened with a howler.

Her very first line suggested farming is 200,000 years old – the same as homo sapiens. In fact, farming has been around for just 12,000 years. Before that, humans were hunter-gatherers.

Archaeologist Matt Pope, of the University of Central London, says: “While there is no reason to expect our national leadership to be well versed in human prehistory and evolution, it would be good to think that some of the fundamentals of our trajectory on this planet were a little better understood.”

He adds: “Understanding where agriculture as a basis of human subsistence fits into the narrative of human development might have important implications for how – at both national and international levels – the past and future impacts of farming might be better understood.”

Scottish farm leaders and politicians were less than impressed with Mrs Leadsom’s repeated references to British people, British food and British farming – and her insistence that she remains fully committed to securing the best possible Brexit deal for the UK.

Edinburgh is on a collision course with London over the issue, with SNP rural affairs spokesman Calum Kerr telling the conference that Holyrood wants direct payments to stay post-Brexit – at least until it is clear that farmers can survive without them. Defra, though, has other ideas.

European Union rules mean farmers who receive payments for capital items exceeding €500,000 should erect a large billboard publicising EU funding. But it is questionable whether the rule has ever been enforced in England – prompting some wry comments on social media.

NFU director general Terry Jones said: “Anyone got a picture of one of these six-foot EU billboards?” Jonathan Baker, policy adviser at the Country Land and Business Association said: “It is almost like the benefits of Brexit only extend as far as solving non-existent problems.”

The Soil Association’s head of farming and land-use policy, Emma Hockridge, took to Twitter to say: “I saw this at about 4am, while feeding newborn. Re-read it about five times thinking the sleep deprivation was getting to me!”

The NFU once described the three-crop rule requiring farmers to grow a minimum number of crops in return for EU subsidies as “utter madness”. But supporters of the rule say it is good for the environment because it encourages a diverse range of cropping.

So will it really go? Asked if she could guarantee the rule would definitely be scrapped or whether it was subject to negotiations over access to the EU single market, Mrs Leadsom said it was “definitely my plan that it would be one of the regulations we would abolish” post-Brexit.

But she added: “As I have made very clear, we have a big consultation ahead of us, so we will be wanting to understand exactly what the feedback is from farmers and people who are affected by such regulations as the three-crop rule before we make any final decisions.”

Anecdotal evidence might suggest as much – with many farmers calling for badger culling to be rolled out more widely to combat bovine TB in disease hotspot areas. But scientists say it is too early to say whether the badger policy is having the desired effect.

Data made available so far has not yielded any scientific evidence of a reduction in cattle TB in badger culling areas, so any such conclusion is premature, according to Rosie Woodroffe, a senior research fellow at the Institute of Zoology, London.

“This is not surprising, because, so far, data have been analysed only from the first two years of culling,” says Prof Woodroffe. It took up to four years for benefits to emerge from a previous randomised badger culling trial, she adds.

This statement suggests a softening of Mrs Leadsom’s stance last autumn when she told a Conservative party conference fringe event that Britons should take up the sort of farm labouring and fruit picking jobs currently carried out by migrant workers.

After suggesting that more British jobs should be filled by British people, Mrs Leadsom appears to recognise that UK farmers and growers need seasonal workers – although access to labour from overseas is a matter for the Foreign Office, not Defra.

Mrs Leadsom accepts the need for seasonal workers – but again that could be subject to Brexit negotiations. Although as recently as last October, she warned: “It is not Theresa May’s intention to deport anyone unless our European colleagues announce their intention to do likewise.”

This might be so. But last month it emerged that an export agreement to sell pigs’ trotters to China has still not been implemented – two years after it was trumpeted by then-Defra secretary Liz Truss in her infamous speech about “opening up new pork markets” in Beijing.

Mrs Leadsom raised the issue during a meeting with Chinese government officials during a visit to Beijing last autumn. But exports have still not started, with some UK food manufacturers, such as Walkers Shortbread, warning that it is a struggle to break into the Chinese market.

Former shadow Defra secretary Kerry McCarthy said: “We are still no closer to signing the pigs’ trotters protocol. If it takes this long to reach an agreement to sell pigs’ trotters, what does that say about our ability to reach all the other trade deals we need in the wake of Brexit?”

“Through our schools, we will be encouraging the next generation to have a closer connection to the land and a better understanding of the food chain”

Speakers at Oxford hold press briefings after they leave the stage – to answer questions from reporters and expand on any points made. Asked if encouraging a closer connection to the land would be written into the school curriculum, Mrs Leadsom said maybe – but maybe not.

“You are tempting me to go into my own personal wishlist,” she said. It was “very widely accepted that a greater connection with the land is very good for you”, but how that was interpreted into policy would form part of a forthcoming consultation.

She added: “Some of the possibilities under consideration would be more work in the curriculum, but that may well not be the preferred solution and I don’t want to second guess any of the specific policies at this point.”

“In terms of our preparations for Brexit, we absolutely have the right resources”

Mrs Leadsom challenged conference delegates to ask as many questions as possible following her speech. Not wanting to disappoint, the audience duly obliged, with one delegate asking whether Defra is “too emaciated to take on the Brexit challenge”.

The Defra secretary’s insistence that her department is ready for Brexit prompted conference chairman Charlotte Smith to ask members of the 400-strong audience to raise their hands if they shared Mrs Leadsom’s confidence. Only Defra minister George Eustice did so.

Footage of the audience’s response showing conference delegates laughing was later beamed around the world by Sky News as Ms Smith quipped: “George – the farming minister – just saving his job there, ladies and gentlemen.”

“I was truly delighted to be appointed Defra secretary”

It’s hard to think of a politician who hasn’t expressed delight after becoming a cabinet minister. Some might find Mrs Leadsom’s reaction hard to believe given her lofty ambitions and failed bid to become prime minister following last year’s EU referendum.

Others will be more willing to give Mrs Leadsom the benefit of the doubt. As a pro-Brexit politician, it is in her best interests to show that leaving the EU is in the best interests of UK agriculture.