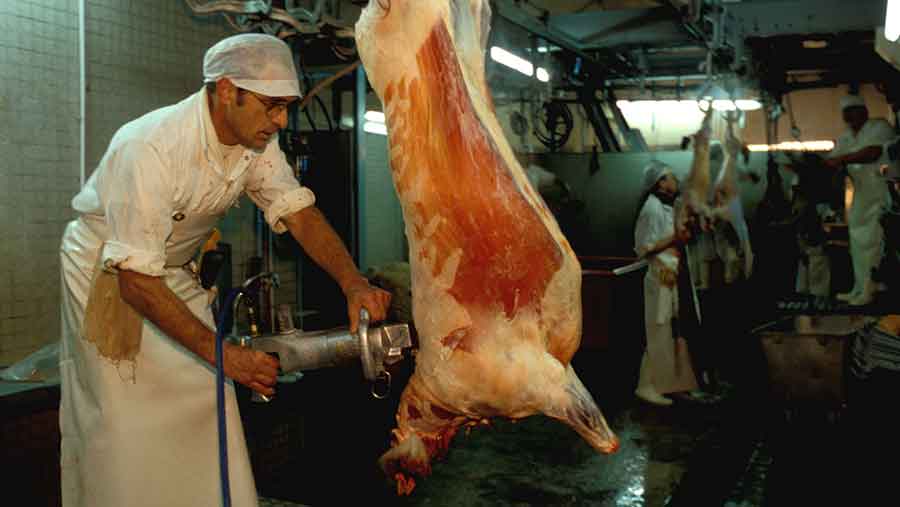 The reliance of the abattoir sector on migrant labour has been highlighted by a survey undertaken for Quality Meat Scotland (QMS).

The survey of members of the Scottish Association of Meat Wholesalers found that 52% of the unskilled workforce, 44% of the skilled workforce and 16% of supervisory and management staff are currently non-UK nationals.

The results suggest that tight restrictions on the movement of people as a result of Brexit are likely to have a negative impact on the British meat industry.

Jim McLaren, QMS chairman, said that factors behind the reliance on non-UK labour may include a perceived unwillingness of Scottish nationals to take on jobs which may involve unsocial hours, particularly in the slaughter sector.

There also appears to be a reluctance to work in areas kept cool for food safety reasons and wear the specialist personal safety equipment required.

“Additionally, many meat processing businesses are located in areas with unemployment levels below the national average – for example, Aberdeenshire, Moray, Dumfries and Galloway, Perth and Kinross, Angus and Stirling,” he said.

Nick Allen, chief executive of the British Meat Processors Association, said their own research suggested that in some areas of the country up to 70% of employees in some plants were from the EU.

“Our members are very concerned about this and it is our number one priority,” he said.

“They do try to recruit locally, but just can’t seem to get the people. They just don’t seem to be interested in the work or haven’t got the basic skill set required.”

The BMPA has warned unless the government addresses the problem then the worst-case scenario post-Brexit is for the UK to produce less meat and import more.

It estimates that the British meat processing industry currently employs 75,000 people and nationwide about 63% of those are EU nationals – mainly from central and eastern Europe.

While this figure has grown significantly over the past 15 years, as the size of the sector has grown, it claims migrant workers have added to the UK workforce, rather than replaced it.

The BMPA says despite most people being keen to eat meat, few UK nationals are prepared to be involved in its production because it lacks social cachet.

It adds that about 40% of workers in a plant require some butchery skills and abattoirs have more success finding pre-skilled workers from overseas.

While someone can achieve basic knife skills with six weeks’ training, it can take two years to achieve full skills.

“It is important that industry has access to skilled labour and we regret that the current government view seems to be that ‘skilled workers’ means only those with high-level academic qualifications,” it said.

“We would like to see the definition of ‘skilled’ to mean an ability that has to be learnt through study and/or practice, something that someone could not walk in off the street and more or less immediately do to the necessary level.”