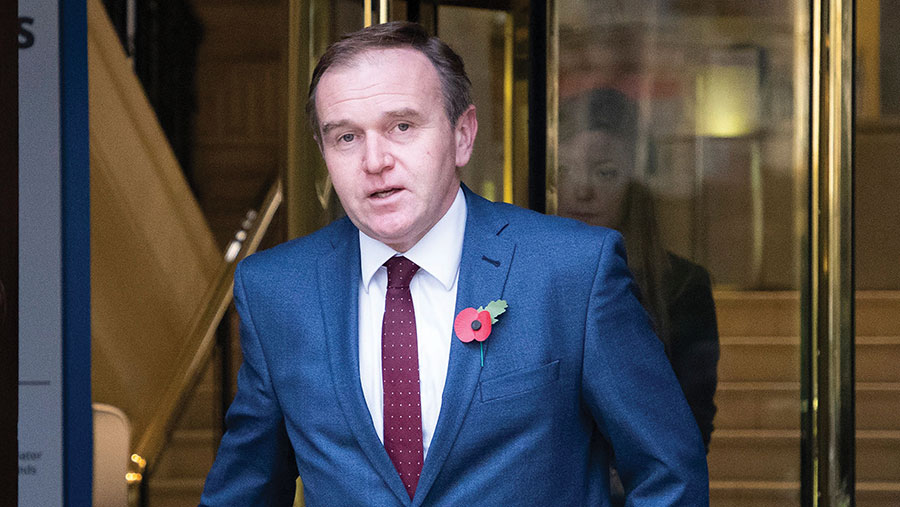 Defra secretary George Eustice is under fire after suggesting UK sheep and dairy producers could easily adapt to a no-deal Brexit.

Mr Eustice made numerous comments related to the future of farming during a BBC interview on The Andrew Marr Show on Sunday (15 November).

They included the suggestion that sheep farmers affected by a no-deal Brexit could diversify into beef production.

Mr Eustice acknowledged that sheep producers would be affected by a no-deal Brexit due to the imposition of tariffs on exports – but rejected the suggestion that the lamb sector would be devastated.

Tariffs would certainly push up the price of UK lamb in the European Union, suppressing demand and leading to a short-term price drop here, he said.

Sheep farmers faced with swingeing tariffs “would be able to diversify into beef” in the event of #NoDealBrexit, says @DefraGovUK secretary George Eustice. pic.twitter.com/G4rMgspb1S

But there would be alternative opportunities for sheep producers.

“If we are not importing as much beef from Ireland, then those mixed beef and sheep enterprises would be able to diversify into beef,” he said.

But the National Sheep Association (NSA), which has consistently stressed the importance of ongoing tariff-free EU trade for the UK sheep industry, said its concerns had seemingly “fallen on deaf ears”.

NSA Scotland chairman Jen Craig said: “For a government minister to suggest on national television that our mixed farmers could diversify into beef in the event of the lamb price crashing is, quite frankly, a laughable response.

“The industry has been calling for support packages to be put in place for compensation for the sheep sector in the event of no deal.

“However, there continues to be a complete lack of clarity and guidance for our industry to plan for the next few months.”

On dairying, Mr Eustice said British farmers would be unaffected by a possible 35% no-deal tariff because the UK was a net importer and would impose its own tariffs on dairy imports.

Dairy farmers won’t be affected by a possible 35% tariff if there is no trade deal with the EU because “we would be applying our own tariffs on imported EU goods,” says Environment Secretary George Eustice#Marr https://t.co/KQ7Sd7ATNx pic.twitter.com/lCgF96fuWa

“We import a lot of dairy products – currently predominantly from Denmark, some from Ireland as well and some from France,” he said.

Mr Eustice suggested companies such as Danish-owned Arla would have to relocate production to the UK if they wanted to supply the British market.

But Nick Whelan, chief executive of dairy processor Dale Farm, said more than 50% of the milk produced in Northern Ireland would be affected by EU tariffs (on shipments to the Republic of Ireland).

Those tariffs would be in excess of 40% in an industry that made a 3% margin – which illustrated the enormity of the challenge faced by the sector.

Mr Whelan said there would be other huge costs too in non-tariff barriers.

“This is an industry that just cannot absorb those types of financial shocks,” he told BBC News Northern Ireland.

“We’ve been caught in a Brexit crossfire here,” he added. “We’re going from a situation where we’ve got a really strong industry to an industry that’ll make no money.

“These tariffs on their own will wipe out total profitability in the industry. We all know that is not a sustainable situation.”