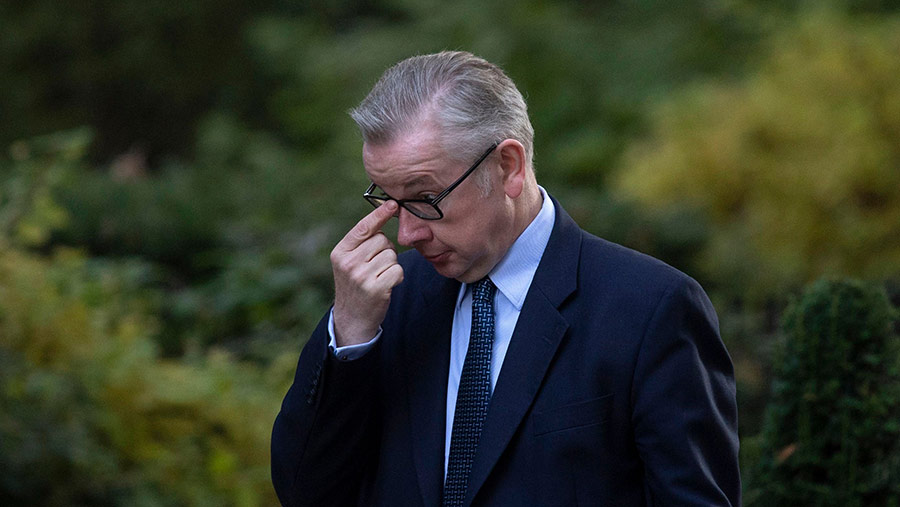 Defra secretary Michael Gove faced repeated calls this week to put food at the heart of his flagship policy for farming and countryside, as MPs debated the future for British agriculture after the UK leaves the European Union.

The government’s landmark Agriculture Bill, which includes plans to replace direct payments with a new system of support requiring farmers to undertake environmental measures, received its second reading in the House of Commons on Wednesday (10 October).

Mr Gove’s determination to phase out direct payments over seven years in favour of rewarding farmers for looking after the countryside has led to concern among farm leaders that the government is prioritising the environment over food production.

‘F is for farmers’

Speaking ahead of the debate, NFU president Minette Batters said: “We are the National Farmers Union – ‘F’ is for farmers. We are not the National Park Keepers Association and we have no intention of becoming it.”

But Mr Gove insisted food and farming was a top priority. He said: “Every measure in this Bill is designed to ensure that our farmers receive the support they deserve in order to give us the healthy food we enjoy and the beautiful rural environment upon which we all depend.”

Shadow Defra secretary Sue Hayman disagreed, describing the Bill as a “huge missed opportunity”. It contained no targets for environmental improvement, she said, or for healthy, home-grown affordable food production in a post-Brexit world.

Liberal Democrat MP Tim Farron said withdrawing direct payments for farmers would be a disaster for agriculture and would force up food prices. “The unintended but utterly predictable consequence is that the government will flood the market with cheap foreign imports,” he warned.

Direct payments were a lifeline to many hill farmers, said Mr Farron, who represents the Cumbrian constituency of Westmorland and Lonsdale. Removing them would force hundreds of upland producers to go under, he added.

But former Defra secretary Owen Paterson described the Bill’s second reading as “a great day”. Looking forward to Brexit, he said MPs were debating details of an agricultural policy devised by British government ministers rather than by European politicians.

The Bill would enable the UK to copy New Zealand when it came to abolishing direct payments and investing in agritechnology – while rewarding farmers for delivering environmental benefits and maintaining the landscape in a way that wasn’t possible under the CAP.

Crashing out of the European Union without a deal will be catastrophic for British farmers, NFU president Minette Batters has reiterated.

An orderly Brexit for farmers – as outlined in the government’s Agriculture Bill – would mean nothing without a satisfactory trade deal between the UK and EU, Ms Batters told an NFU Council meeting on Tuesday (9 October).

“It is easy to think we have got five, six or seven years to figure this out. Yes, if all goes to plan, we have. If we crash out without a deal, we are into emergency measures – that none of us will have seen in our lifetime – straight away.

“That is why I reiterate again: a no-deal situation is catastrophic.”

Ms Batters issued the warning as The Times newspaper reported that civil servants were discussing plans to slaughter sheep that could not be exported if ports closed in the event of a no-deal Brexit – a suggestion that Defra secretary Michael Gove told MPs he did “not recognise”.

But Mrs Batters said a no-deal Brexit would “quite simply be unsuccessful” for British growers and livestock producers – as well as the wider food industry. She added: “There is nothing on the table at the moment that reassures me it will be all right.”