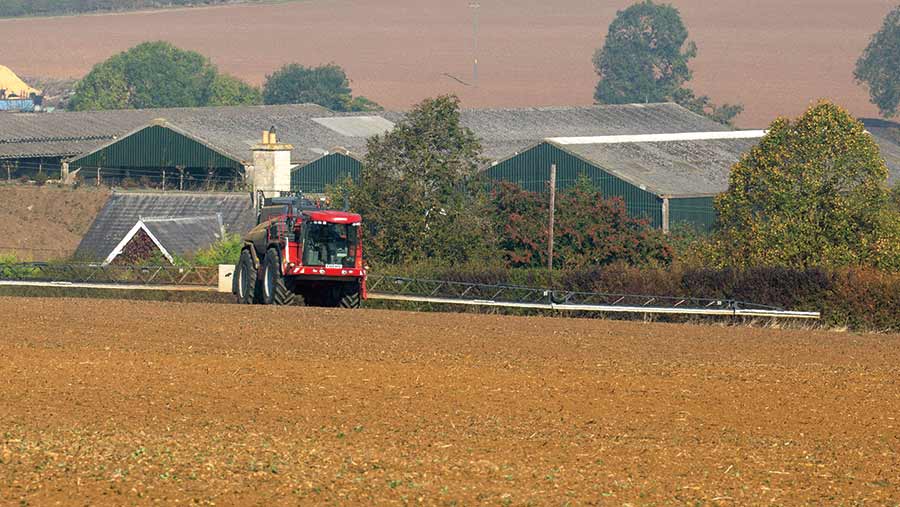 Growers and livestock producers are being urged by the Agricultural Industries Confederation to secure farm input supplies for next spring now amid increasing uncertainty over Brexit.

Imports of inputs will face additional checks if the UK leaves the EU without a deal on 29 March 2019, says the government – potentially disrupting supplies of agrochemicals and veterinary medicines at a key time of year for farmers.

Theresa May has warned such a scenario is a real possibility if the government loses a crucial vote on the prime minister’s proposed EU withdrawal agreement.

The vote is due to take place on Tuesday (11 December) following a five-day debate by MPs.

Farm leaders have long warned that a no-deal Brexit would be devastating for UK food and farming exports.

Manufacturers and agricultural suppliers say a messy Brexit could also have major implications for a range of imported farm inputs.

Growers should assess how their businesses might be affected by any disruption in trade, says the Agricultural Industries Confederation, which represents farm input suppliers.

This should include speaking to suppliers now to discuss input requirements for next spring.

“Farmers who expect they will be able to get what they want at very short notice next spring risk being disappointed,” says AIC head of policy Paul Rooke.

“Maintaining regular contact with all suppliers will be more important than ever over the next couple of years.”

The AIC has more than 250 members in the agri-supply trade and represents £8bn turnover at the farmgate. Represented sectors include animal feed manufacturers, crop protection and agronomy, fertiliser and seed suppliers.

Agrochemical giant Bayer says it has three-pronged approach to deal with a no-deal Brexit. It has secured additional storage for products, is preparing to import product lines sooner and will continue to work with distributors to ensure deliveries.

Trade in bulk products arriving by boat are less likely to be disrupted than goods imported by truck from mainland Europe. This includes shipments of feed and fertiliser arriving from countries outside the EU, which are expected to be largely unaffected.

Even so, any livestock producers stockpiling feed must ensure stores meet assurance scheme requirements. Again, the advice is to talk through any planned changes to feeding regimes with feed advisers over the winter months.

The National Office for Animal Health (Noah), which represents the animal health industry, says a collaborative and co-operative regulatory system between the UK and the EU is essential for the sector to thrive after Brexit.

A no-deal Brexit could affect availability of animal health products in both the short-term and long term. This could present supply problems and real risks to livestock health and welfare, says Noah chief executive Dawn Howard.

“We need functioning supply chains spanning the UK-EU border, crucial to the production of veterinary medicines and their onward supply to tackle disease. Border delays, complex processes and increased costs would cause a risk to medicines availability.”

What the government says no-deal Brexit means for:

The government says it would establish an independent standalone regime for plant protection products (PPP), with all decision-making repatriated from the EU to the UK.

This would ensure continued levels of protection for human health and the environment, it says – well as making it straightforward for businesses to put products on the market, and ensuring UK businesses and individuals can continue to access a range of pesticides.

All current active substance approvals, PPP authorisations, and maximum residue levels in place on 29 March 2019 would remain valid in the UK so businesses could continue to trade and products would still be available.

Mutual recognition of batch testing of veterinary medicines would cease immediately, says the government – although it has made arrangements so this has minimal impact.

To ensure continuity of supply, the UK would for a time-limited period continue to accept batch testing of veterinary medicines carried out in the EU, European Economic Area or any third countries with whom the EU has made arrangements.

Any veterinary medicines imported into the UK from any other third country would continue to require batch testing in the UK and certification – except where third countries and the EU have made appropriate arrangements with each other.

The existing domestic framework which allows fertilisers to be sold in the UK will remain in place because it is separate from the EU framework.

Continuing both regimes in parallel will provide the greatest short-term continuity, says the government. To ensure continued supply, there will be a suitable time-limited adjustment period during which “EC fertiliser” could be placed on the UK market as now, it adds.

Varieties already on the EU common catalogue but not on the UK national list are being added to the UK list – allowing them to be marketed after a no-deal Brexit.

In a no-deal scenario, Defra intends to allow these varieties to be marketed for an interim period of two years after the UK leaves the EU – and to apply the same interim period to the marketing of EU certified seed and propagating material.

Import controls will be risk-based in the event of a no-deal Brexit, says the government. No new controls are planned for imports from the EU of animal feed categorised as high risk because the risk does not change on day one.

For shipments from further afield, a new notification system is being developed because the UK will no longer have access to EU import controls. High-risk feed imported from third countries via the EU will be checked on entry to the UK at a designated point of entry.

Plan now if you know requirements

Farmers should act now to secure supplies for next spring, says Jon Duffy, chief executive of the AF Group, which sources £270m of farm inputs annually for its 3,500 members.

“We are encouraging members to plan as early as they possibly can,” says Mr Duffy. Most growers already know what crop protection products they are likely to need and that information is being fed through to manufacturers and distributors, he adds.

In terms of logistics, the AF Group is getting as much product in stock as possible – although Mr Duffy says this will only cover a short period. Growers able to store products on-farm will benefit most, he explains. “The cheapest place to put it is on farm.”

The farmer-owned company is asking livestock producers to plan ahead too – especially when it comes to veterinary medicines. “We can then talk to distributors and manufacturers and to ensure those vet meds are in the country and stored.”

Yorkshire farmer and contractor David Blacker says Brexit uncertainty has already prompted him to secure his agrochemical requirements for next spring.

Mr Blacker said he had ordered £25,000 for spring and summer sprays. “There is talk of 5-10% price rises early next year – I think some of it will be blatant profiteering but some of it will be tightening up on supply chains,” he told Farmers Weekly.

“Availability is good and prices are good. But it won’t be like that forever. There will be a point where 2018 stock is all sold out and it will be new stock at a new price. I am trying to get everything on farm as quick as possible.”

“From a business perspective, we are transferring cash into stock,” said Mr Blacker, who has five farming customers. But it meant he had secured access to products like chlorothalonil which had proved slow getting on to farm last season before the T0 timing.