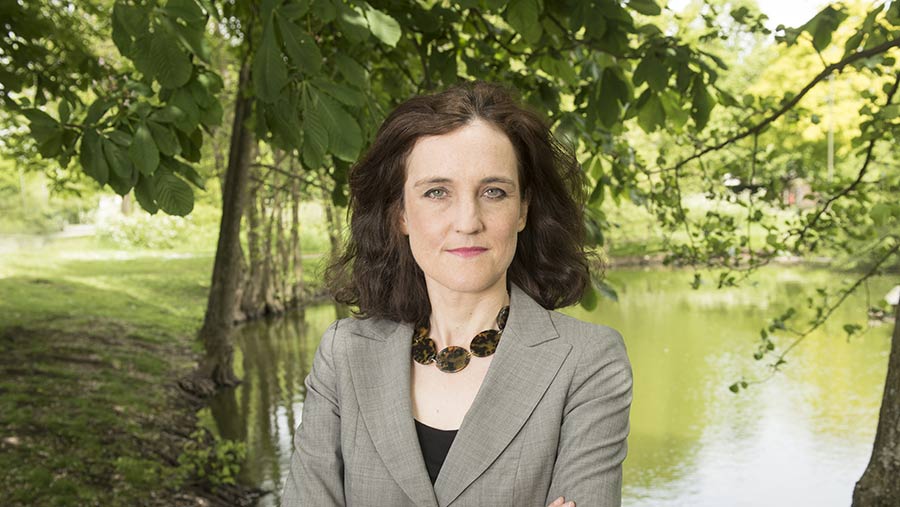 Appointed as the new Defra boss by incoming prime minister Boris Johnson, Theresa Villiers takes the job at a critical time in our industry’s history.

Strongly pro-Leave, Ms Villiers has argued that trying to stop the implementation of the referendum result would be “regrettable for democracy”.

Along with Iain Duncan Smith, Michael Gove, Chris Grayling, John Whittingdale and Priti Patel, she was one of a group dubbed the “gang of six” who posed for photos with a ‘Let’s Take Back Control’ banner in 2016.

She’s called for a ban on the export of live animals for slaughter and has supported Compassion in World Farming’s campaign demanding the outlawing of cages for all farmed animals.

“Agricultural support payments will be needed to ensure food produced with high welfare standards is not priced out of the market by cheaper less compassionate alternatives,” she has said.

“Our new system of financial support for agriculture should provide incentives for farmers to move away from industrial livestock production towards free-range systems.”

Ms Villiers has dubbed this as a “blight” and urged government to go further with efforts to prevent litter from disfiguring roads, countryside and public spaces.

In particular, she’d like to see police and prosecutors crack down harder on fly-tipping and for the obligations on Highways England to clear litter to be beefed up.

In a 2016 interview with the Belfast News Letter she said that a new system of subsidies could be less bureaucratic that the current CAP arrangements and suggested that, when it came to farm support, “arguably we’ll have cash to spare, so it’s not impossible that we could have a more generous system”.

Elsewhere, she has commented:

“Food and farming is one of the most important sectors in the UK economy…. quality, safety, traceability and compassionate treatment of animals should all be at the heart of the UK’s post-Brexit brand for food and farming.”

In 2015, she voted not to ban shale gas exploration, despite concerns among some farmers about the damage it could cause.

She’s talked about the “need to strike the right balance between the legitimate concerns of landowners, and the benefits to society as a whole of permitting development”, highlighting the protections afforded by existing safety and environmental legislation.

Ms Villiers is in favour of culling badgers to tackle bovine TB, as part of a package of measures including vaccination and stringent cattle movement controls.

“While the decision to cull badgers has not been taken lightly, it is vital that the government is able to use all the tools at its disposal to tackle the spread of a disease that has now reached epidemic proportions,” she has said.

After many years opposing the fox hunting ban, she announced a change of heart in 2017 and decided to support it.

She had opposed the ban fearing it would damage the rural economy and way of life, but announced she hadn’t seen any “convincing evidence” that the ban had caused the job losses and economic damage some feared that it would.

“It is also the case that it has been possible for people to continue the sporting pastime of hunting with hounds, without actually chasing a fox,” she added.

Ms Villiers favours construction of the high-speed rail link, saying it’s “the right way forward” in dealing with transport capacity restraints, that it’s an attractive alternative to domestic flights and that the environmental impact will be far less than many fear.

Her previous roles have included minister of state for transport and secretary of state for Northern Ireland, She resigned from the latter post in 2016 after declining a new job offered to her in a Theresa May reshuffle.

The 51-year-old grew up in London, was educated at the independent Francis Holland School and studied law at Bristol University and Oxford. She is divorced.

She declared on Facebook that she was “very honoured” to have the role.

The CLA, meanwhile, said it “looked forward to working with her to grow our rural economy, support businesses, create jobs, mitigate climate change, improve biodiversity and provide high-quality food to the country and beyond”.

The NSA, however, had previously warned of the dangers of moving Michael Gove from Defra.

Its chief executive Phil Stocker has said: “At such a fragile time, the last thing our industry needs is a change in our secretary of state or ministers… We need a Defra team with an understanding of agriculture and its role in the countryside.”