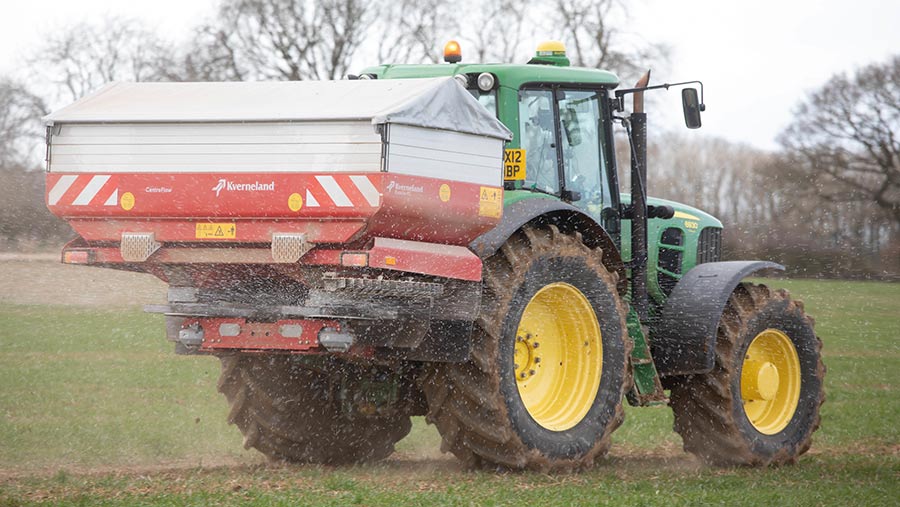 Government plans to place a ban on the use of solid urea have taken many farmers by surprise, even though the idea has been kicking around for a couple of years.

The notion first came to light in the Clean Air Strategy, published in January 2019, which sets out how the government plans to tackle all sources of air pollution.

The 109-page document covers many areas, including transport, industry and domestic heating.

But there is also a specific chapter on agriculture, which includes “a requirement to take action to reduce emissions from urea-based fertilisers”.

In particular, urea is blamed for releasing ammonia, which combines with other pollutants to form particulate matter, which affects human health.

The ammonia in the air can also lead to the deposition of nitrogen compounds onto soil, raising acidity levels and releasing nitrous oxide – a potent greenhouse gas.

Both farming and trade representatives say they have been working closely with Defra ever since the Clean Air Strategy was announced to ensure farmers’ best interests are protected .

But now that the full consultation on urea has been launched, the clock has started clicking, with stakeholders having until 22 January to make their views known.

So what does the consultation actually say?

Setting the scene, the document explains that agriculture is responsible for 87% of total UK ammonia emissions, mostly linked with livestock production.

The aim is to tackle this with measures such as requiring the use of low-emission manure spreading by 2025, extending environmental permitting to the dairy and beef sectors, requiring slurry stores to be covered by 2027, and introducing new standards for intensive livestock housing.

But about 18% of ammonia emissions are attributed to inorganic fertiliser application, with urea releasing the most at 8%. The government has therefore set a target to reduce UK ammonia emissions by 16% (from 2005 levels) by 2030.

Its consultation sets out three options:

The first of these, the outright ban, is clearly the government’s preferred option, as it would deliver about 31% of the ammonia reduction target by 2030.

Defra says its consultation relates to England only – where urea use is highest by a considerable margin. But it adds that authorities in Northern Ireland are considering measures to reduce emissions from urea, while the Welsh government will be consulting shortly.

The NFU says it has been working closely with Defra since the publication of the Clean Air Strategy and will continue to do so.

“We have already had some success in securing the inclusion of the restricted spreading option in the consultation, as Defra had once thought it may not deliver the kind of emissions reduction needed,” said a spokesman.

The Defra analysis suggests the cost to the farming industry of banning solid urea will be about £125m from 2022 to 2030 – mainly from increased use of ammonium nitrate (AN) and higher storage costs – compared with net benefits of almost £1bn associated with improved human health.

Why is urea being targeted?

Urea is being targeted because it loses more ammonia than AN when spread on the land. It accounts for about 20% of all inorganic fertiliser in the UK, a percentage that is growing.

But while AN loses much less nitrogen in the form of ammonia and is taken up by crops more efficiently, it is more susceptible to nitrate leaching and nitrous oxide emissions.

“An increase in ammonium nitrate use could lead to a small – up to 5% – increase in nitrate leaching to surface and groundwaters,” says the consultation, adding that the continued use of controls such as nitrate vulnerable zones and the Farming Rules for Water is crucial.

Liquid urea, used in combination with liquid AN, is not being considered for a ban, as it is important for specific crops such as high-protein milling wheat, and there is no viable replacement.

What a farmer says…

A ban on solid urea would force up farm input costs for little or no benefit, says Hertfordshire beef and arable farmer Andrew Watts.

Urea is 20-25% cheaper than ammonia nitrate (AN), says Mr Watts, of Wallington Farms, Royston. Used responsibly and appropriately, it is also less prone to leaching than AN, he adds.

“We’ve always used urea early in the season, when it is slower-releasing, because the weather is cold and damp. We don’t use it when the weather warms up – that’s when we switch to ammonium nitrate.”

Removing the option of solid urea would take competition from the fertiliser market, says Mr Watts, giving AN manufacturers carte blanche to increase their prices, he argues.

“The fertiliser market has always suffered from a lack of transparency, and removing urea would make it even worse.”

Rather than a blanket ban, Mr Watts says farmers should be encouraged to use urea responsibly using guidelines. “If it is used in lower temperatures and when there is moisture about, it is fine,” he says.

Mr Watts also argues that it would be unfair to stop British farmers from using urea and then expect them to compete against imports of food produced by farmers overseas who are still able to apply it.

Like other farmers, Mr Watts believes if urea goes, AN could be next. “It is too easy to remove things – and until somebody invents leguminous cereals, we are going to need nitrogen to grow our crops.”

Rather than banning solid urea, the government should consider ways of mitigating ammonia emissions from the fertiliser, says the Agricultural Industries Confederation (AIC), which represents fertiliser manufacturers and suppliers.

Banning solid urea risks serious unintended consequences, it adds, including market distortion, it claims. Requiring farmers to use inhibited urea would also be complicated by varying efficacy due to formulations, shelf life and the effect of soil and weather on performance in the field.

AIC head of environment policy Jane Salter says the organisation has been in discussion with Defra for more than two years over the issue. Any final decision to ban solid urea must not be made lightly – and should be measured and proportionate, she adds.

“We don’t believe a ban is the right approach,” says Ms Salter. “It is possible to reduce ammonia emissions by good practice.”

The AIC says there is a huge willingness and commitment to reduce ammonia from urea. The British Survey of Fertiliser Practice (BSFP) indicates that farmers who use it are aware of the risks of ammonia loss and take steps to manage it.

Ms Salter says the AIC is also concerned that there is pressure for Defra to act due to the tight ammonia ceiling target to achieve by 2030 – but without the space and time to design a longer-term outcome-based policy.

The AIC’s preference is to wait for Defra’s soon-to-be-established Nutrient Management Expert Group to consider the bigger picture – and a new way of looking at regulations around fertilisers.

What the environmentalists say…

Concerted action from landowners, industry and government is needed to start bringing ammonia emissions down and arrest the effect it is having on wild plants, lichens and fungi, as well as the wildlife that rely on them, says environmental group Plantlife.

“More than one-third of Britain’s wildflowers prefer low-nutrient conditions and are therefore losing their roothold.

“Species like harebell and bird’s-foot trefoil are being crowded out by more ‘brutish’ species like brambles, hogweed and hemlock that revel in excess nitrogen.

“This has knock-on effects that can be lethal to the habitats and the wildlife they support.”

You can add your views on the proposed urea ban on the government website: