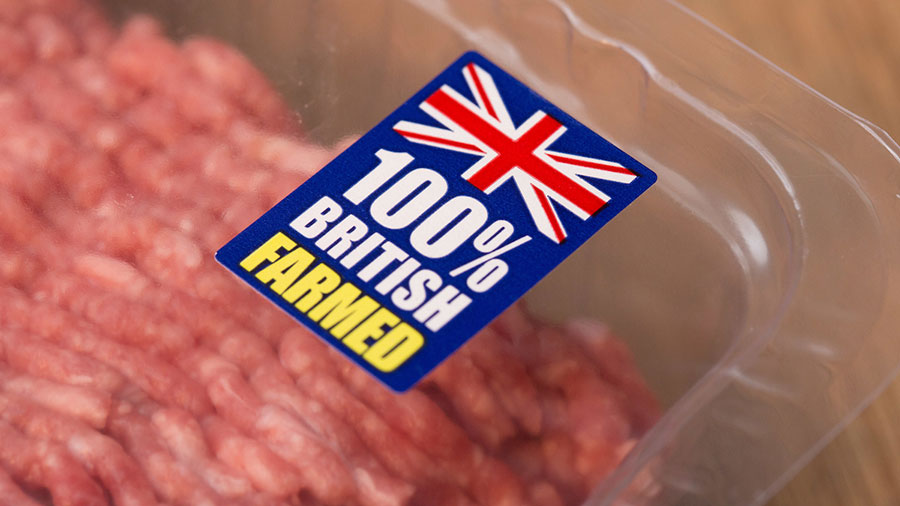 Feed, fertiliser, fuel and labour costs have all risen dramatically in the past 12 months, squeezing margins from profit into loss.

With some sectors forced to rein in inputs this will lead to reduced yields and production, according to NFU head of food policy Jack Watts.

Left unchecked, there could be double-digit cuts in output across all sectors of UK food production, he says.

Those output cuts could bite as early as the autumn, with wide-scale shortages an even greater likelihood in 2023.

Surging energy prices are central to the potential cutbacks in output.

Since Russia invaded Ukraine in February, energy costs have gone through the roof.

Ukraine also grows about 10% of the world’s wheat, and exports have slowed to a trickle since February. Next season’s grain crop is shrouded in uncertainty with men of working age fighting and millions fleeing the country.

How this will affect the harvest and what the knock-on for next year will be is hard to gauge. The effect on feed prices for livestock is already clear, however, with costs soaring to £300/t in recent months for some compounds.

The war has only worsened an already serious situation and shone a light on how much our food supply is increasingly in the hands of other nations, Mr Watts says.

Labour recruitment now the UK is outside the EU is a major problem. Tougher post-Brexit immigration laws have imposed limits on overseas workers, threatening harvest and processing to the point where farmers are being forced to cut production.

The environmental policy is another major issue. The UK government wants farmers to farm hand-in-hand with the environment, but this carries a risk of overshooting on rewilding and big carbon offsetting for corporate gain.

Neil Parish, Conservative MP for Tiverton and Honiton, and Environment, Food and Rural Affairs (Efra) select committee chairman, says the Ukraine conflict should have woken us up to the fact that the future does not lie in importing food.

The government, Home Office and Defra must do more to support food production, he insists.

A recent report by the influential cross-party committee warned that government had to address the post-Brexit labour shortage to avoid permanent shrinkage of the food sector.

Last year, 67% of seasonal farmworkers in Britain were from Ukraine, and a further 7% were Russian, Mr Parish points out.

That is almost three-quarters of the potential workforce that will not be heading to the UK this summer. Without workers, fruit and veg won’t get picked and cows won’t be milked, he warns.

Mr Parish says the Home Office had pinned its post-Brexit hopes on a flow of UK labour to farms.

But he believes this shows a lack of understanding of the situation. People who already live in the UK live in fixed locations and cannot, or will not, move to the seasonal work when and wherever it arises.

When Britain was still in the EU, the overseas workers were mobile and with few ties, suiting the jobs available. When the work ended, they went home.

“We need, and very quickly, to have a seasonal workers scheme that mimics this and is attuned to allow the right number of workers in to do the jobs,” Mr Parish says.

He also criticises the lack of a cohesive strategy for farming, farmland and the environment.

The land area is oversubscribed and the country is expecting too much from it.

“We are asking land to produce food, offset carbon, harbour wildlife, produce energy and act as recreation,” he says.

A first step to a food strategy should be a land audit that asks what farmland can produce, where it is and what it is being used for. Then, the government could set priorities for food production.

Dairy product supplies are already about 2% below last year’s output, while global demand has been growing at 2%, says John Allen, managing partner of Kite Consulting.

But that 4% gap between demand and supply could widen.

Many dairy farmers are considering their future in the sector, citing labour recruitment as a key reason for many wanting to quit.

Often it is the larger farms requiring significant staffing that are the ones considering leaving the sector. This points to the potential for further contraction in output unless something is done to secure labour.

In the short term, access to fertiliser is another big challenge.

Information suggests that between 15-20% of dairy farmers are looking to cut back, which will lead to lower grass growth, forage shortfalls and further pressure on milk yields.

As well as shortfalls in government policy, dairy farmers need more support from processors and retailers. Prices have risen, but need to continue rising to keep pace with input costs, or future supplies will be threatened.

In the past four months, the UK flock has shrunk by 10% or 4m hens.

There is traditionally a lull in egg consumption through the summer, which is masking the damage being done, Mr Gooch says. But demand picks up in the autumn and by the time we reach that stage, shortages are likely.

The government’s post-Brexit answer appears to be to import cheap eggs with minimal checks. Long term, he fears government policy will force British egg producers out of production, leaving the UK wholly reliant on imports at whatever economic, quality and welfare cost that may be.

At £2/kg, input costs are way above the standard pig price and many businesses are borrowing heavily to cling on.

“We are trying to estimate how many people are on the edge, but some are days away,” says Dr Davies.

This situation is not sustainable, she adds, and is particularly concerning when taking into account that pigmeat is a cheaper source of protein than other meats and much more affordable for UK families that are suffering financially.

“We need retailers to push up prices, back British, and for the whole chain to ensure returns are shared fairly,” Dr Davies says.

“It’s all occurring under the government’s nose, but they just don’t seem to be interested.”

With supermarkets selling veg at below cost of production prices, such as carrots at 19p/kg, there is no margin to generate profit and invest, says Jack Ward, chief executive of the British Growers Association.

Add to that fertiliser values, labour costs and a five-fold hike in gas prices, and it is clear the situation is out of growers’ hands, Mr Ward says.

Unless growers can see significant opportunities and support that will change the situation, many will be forced to quit, he fears. “I am not sure where the sector will be in 12-18 months.”

A recent survey of grower intentions revealed 30% were looking at reducing production.

Mr Ward voices his frustration and concern at the government’s policy to rely increasingly on other countries to provide the UK’s food.

The government should consider where our food will come from in the future with many agricultural nations serving giant markets like the EU, US and China, he says.

“The only way we will get a look in, is to pay higher and higher prices for imports in the future.”

We are allowing our market to be taken away and we will never get it back because the investment needed to start again doesn’t stack up, he warns.

From 2023, cereal production levels will fall and the UK will increasingly rely on grain imports instead, he believes.

Growers have been forced to cut back on nitrogen (N) applications. In a normal year, N would be applied at 220kg/ha. This year, many have used 160kg/ha to cut costs and retain some fertiliser to supplement supplies for 2022-23.

He points to fertiliser manufacturers being forced to mothball factories because gas prices have rendered production uneconomic.

“The government has failed to understand or, even worse, is ignoring the growing food crisis situation,” he says.

Instead, its policies are encouraging farmers to quit, put in solar panels or adopt lower yielding practices.

Mr Sparling describes this as “shameful” and argues the 4m ha of arable land in the UK must be protected for food production.

“We’ve got the land, the knowledge and the capability, but we are abandoning food security and placing greater emphasis on the environment,” he says.